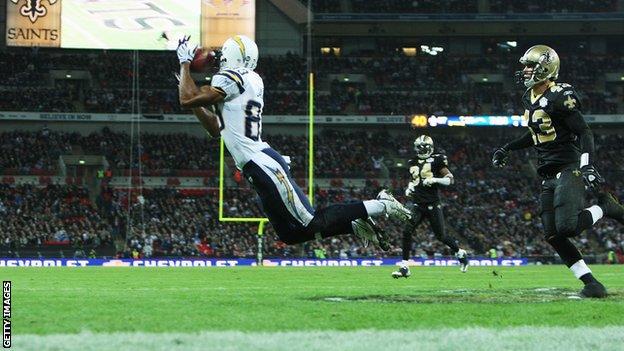 Long before Wembley began hosting NFL games, the stadium had always been used for a variety of activities.

The original stadium, built in 1923, hosted five European Cup finals, the 1948 Olympic Games and the Live Aid benefit concert in 1985.

It also doubled as one of the UK's premier greyhound tracks, which led to a bizarre conflict during the 1966 World Cup.

The group game between Uruguay and France had to be moved to White City when greyhound organisers refused to cancel their scheduled races.

The new Wembley, opened in 2007, may have left the dogs and the electric hare behind but it is no different in its need to stage more than just football matches in order to remain economically viable.

The Football Association's latest financial figures are a testament to this. Turnover for 2012 was £318m, down £11m on the previous year.

The main reason for this reduction has been attributed to the cut in the number of events staged at Wembley.

Hosting Olympic football meant a reduced programme of only four summer concerts at the stadium - Take That played eight sell-out shows alone in the summer of 2011 - while the Community Shield between Manchester City and Chelsea was moved to Villa Park.

The absence of the Champions League final did not help the balance sheet either, after the stadium hosted Barcelona's win over Manchester United the previous year.

Broadcast income remains the FA's largest revenue source, with the bulk of the money coming from rights sold for England games and FA Cup matches.

But the mix of events staged at Wembley - 100% owned by the FA - remains a key factor for its financial strategy, especially when the structured debt for the stadium is £267m.

One consistent income stream has stemmed from the NFL games played at Wembley since 2007.

This year, two NFL games will be played in London as the FA capitalises on a contract to stage fixtures that stretches to the end of 2016.

Pittsburgh Steelers take on Minnesota Vikings this weekend. That will be followed by Jacksonville Jaguars playing San Francisco 49ers in October. Both games sold out within hours of tickets going on sale.

The benefits of a permanent NFL franchise at the stadium - with the eight regular season matches it would bring - are therefore not lost on its executives.

"We'd have to look very carefully at the calendar and make sure we have the right balance," says Roger Maslin, the managing director of Wembley.

"Football is our priority but yes, I'm absolutely confident that if [NFL commissioner] Roger Goodell wanted to have a franchise here, we could absolutely deliver on it."

That ambition to host big, global events extends to the Super Bowl, too, with Maslin clear that Wembley could host the event if the "big call" to move it from the US for the first time were ever made.

"If they were bringing it anywhere in the world, we want it here," he said.

Football, though, will always be the core of Wembley's appeal and raison d'etre.

Having brought the Champions League final to the stadium twice in the past three years, European governing body Uefa is aware of the sporting and financial benefits which Wembley offers.

London's position as a central airline hub, its hotel capacity and its transport infrastructure add to the benefits of staging Europe's biggest game at the stadium.

It is something which the FA hopes will continue with a degree of regularity in the future.

"There are new and improved stadia in France and in Russia for the [2018] World Cup," says FA general secretary Alex Horne.

"In Ukraine, there's a big stadium in Kiev that's impressive, but [Wembley's] capacity of 90,000 is still unique in Europe.

"The facilities were designed 13 years ago, built seven years ago. They remain of that standard for delivering those massive events.

"We will always be looking to host events like the Champions League final."