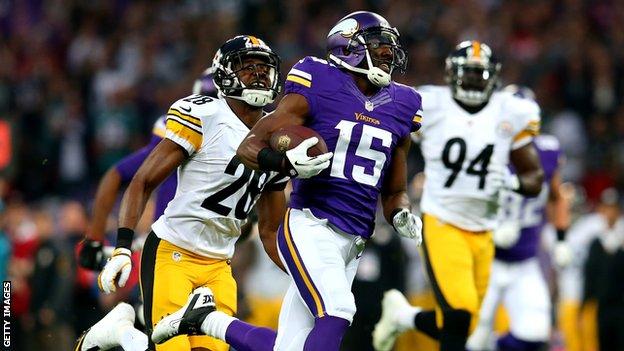 Minnesota Vikings claimed a tense 34-27 win over Pittsburgh Steelers in the NFL at Wembley Stadium.

A crowd of 83,519 saw a thrilling finish as the Steelers came close to scoring in the final seconds which would have forced overtime.

Coach Leslie Frazier added: "It feels great to get a first 'home' win of the season even if we had to come all the way to London to get it.

"I'll always have a special place in my heart for Wembley Stadium. Thank you London for helping us get that first win. With all the noise we felt at times like we were back at home."

Pittsburgh, who contested three of the last eight Super Bowls, have now lost their opening four games of the season for the first time since 1968.

NFL on the road

The match was the first of two NFL games at Wembley in the space of a month - Jacksonville Jaguars play San Francisco 49ers on 27 October.

There was a quick response from Pittsburgh as Le'Veon Bell took Roethlisberger's pass to score but Adrian Peterson restored the Vikings' 10-point lead with a spectacular 60-yard touchdown.

The Steelers made the perfect start to the third quarter when Bell forced his way over, but they then conceded two touchdowns in as many minutes as Peterson and Jennings both claimed their second of the game for a 34-17 lead.

The Steelers were closing in on the Vikings' endzone and looked set to level the match before Griffen stripped the ball off Roethlisberger on the six-yard line with 19 seconds left.