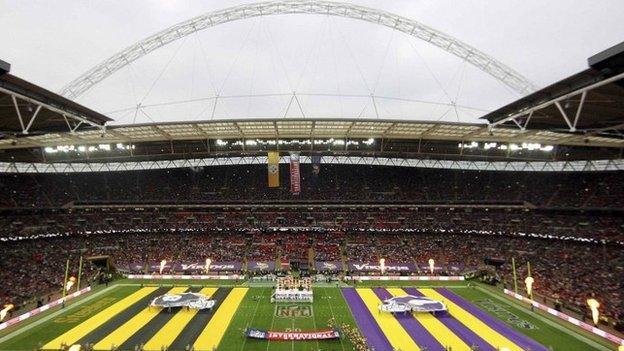 The NFL will stage three games in London next year as it pushes towards having a franchise in the city.

The Jacksonville Jaguars, Atlanta Falcons and Oakland Raiders will all play 'home' games in 2014 at Wembley against opponents yet to be named.

The Jaguars face the San Francisco 49ers this month in the first of four games they have committed to play at Wembley each year until 2016.

"Both of this year's games in London sold out quickly. The fan enthusiasm for our sport continues to grow.

"By playing two games in the UK this year, we are creating more fans. We hope that with three games in London next year we will attract even more people to our game."

Last month, a crowd of more than 83,000 watched the Minnesota Vikings beat the Pittsburgh Steelers 34-27 at Wembley.

Wembley has hosted regular-season games every year since 2007, but this season is the first in which it has staged more than one match.

The Jaguars are owned by Fulham owner Shahid Khan, and he is keen for the team to create a strong link with UK fans by returning regularly.

Khan said: "The experience the Jaguars have had already in London has been every bit what we anticipated and more, and this is all before we've even played our first game in Wembley Stadium.

"We made the right decision to commit to playing a home game in London each season through 2016."

Atlanta and Oakland will be venturing outside the United States to play a regular-season game for the first time.

The Raiders were last in London for a pre-season contest against the New Orleans Saints at the old Wembley Stadium in 1990.