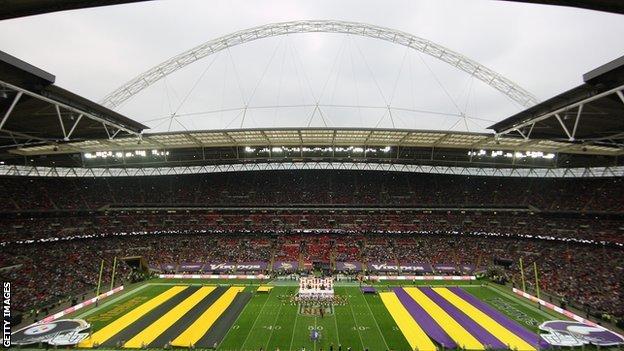 On Sunday the Jaguars will call Wembley Stadium home in the first of four games over four years in the capital.

But, while three regular-season games will be staged in London in 2014, Khan feels the city is yet to prove it can support a club of its own.

"Quite frankly it's very premature. There is, in all candour, a novelty aspect to it," he told BBC London 94.9.

"This year we have two games and next year we will have three here in the UK.

"Over the next couple of years we'll know whether there's a demand for a team that's playing more than a game or two here."

Last month a crowd of 83,519 watched the Minnesota Vikings claim a tense 34-27 win over Pittsburgh Steelers in the seventh International Series game.

Khan, who bought Fulham from Mohamed Al Fayed in July, has been impressed by the British appetite for American football.

"The NFL is very powerful in the US and I think the growth opportunities overseas, in London, couldn't be more natural for us," he said.

Wembley might be the stage on which the billionaire car-parts entrepreneur hopes the Jaguars can build a fan base on the other side of the Atlantic, but it is at Craven Cottage where he is strengthening his sports empire.

"I think the Premier League has a lot of wonderful attributes and the NFL can learn a lot from that," Khan said.

"It had to be a London club [I bought] and a club that had the same values - is family friendly and so on.

"The only club, frankly, that fits that criteria is Fulham."