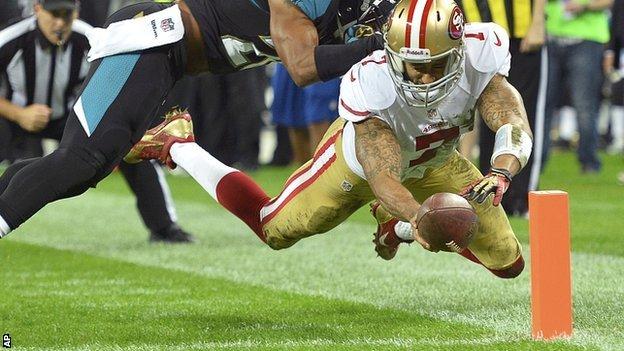 The San Francisco 49ers condemned the Jacksonville Jaguars to their eighth successive defeat at Wembley in the latest NFL International Series game.

The 49ers, Super Bowl runners-up last season, scored six touchdowns in a 42-10 victory, their fifth in a row.

The Jaguars, owned by Fulham proprietor Shahid Khan, are scheduled to play four games in London between 2013 and 2016.

But a one-sided defeat by the 49ers will have won the Jaguars few new fans in their second home.

Sunday's encounter was the second NFL game to be played at Wembley this season following the Minnesota Vikings' 34-27 win over the Pittsburgh Steelers.

And with the NFL determined to expand into new markets there will be three games at Wembley next season, including the Jaguars versus the Dallas Cowboys.

Jacksonville went into the game against the 49ers as rank outsiders and they were soon behind through a 19-yard touchdown by running back Frank Gore.

Quarterback Colin Kaepernick demonstrated his own running skills with a 12-yard touchdown as the 49ers led 14-0 after the first quarter.

Vernon Davis added a third touchdown early in the second quarter after Kaepernick faked a hand-off to Gore and floated a pass over the top of the Jaguars' chaotic defence.

And when Kaepernick ran in his second touchdown midway through the second quarter the game was over as a contest.

Josh Scobee landed a 36-yard field goal to at least get the Jaguars three points on the scoreboard before Chad Henne delivered a 29-yard strike to Mike Brown for the Jaguars' first 'home' touchdown of the season.

The 49ers hit back immediately though when Gore plunged into the endzone after Kyle Williams and Kendall Hunter did most of the leg work on the drive.

Matters got even worse for the Jaguars at the start of the fourth quarter, with Marcedes Lewis fumbling a greasy ball and 49ers linebacker Dan Skuta running it back 43 yards to the endzone.

Kaepernick finished with 164 yards passing and 54 yards rushing to improve the team to six wins and two defeats this season.