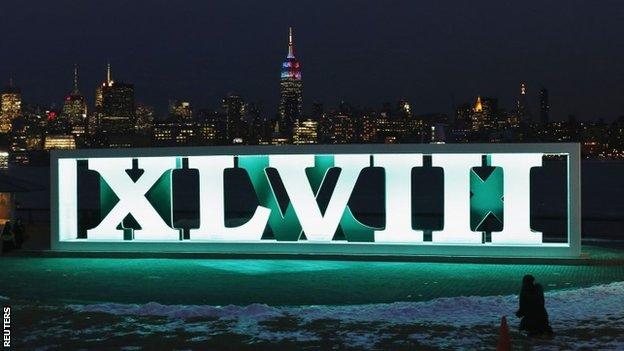 The Denver Broncos take on the Seattle Seahawks in Sunday's Super Bowl at the MetLife Stadium in New Jersey.

The latest edition of the United States' biggest annual sporting event kicks off at 23:25 GMT and will be viewed in more than 200 countries.

While it will be the first Super Bowl held outdoors in one of the colder states, the 7C (44F) conditions at kick-off will not be as low as feared.

The Broncos last won the Super Bowl in 1998, but the Seahawks have never won.

With New York battered by major snow storms last month, there had been concerns that the game would have to be postponed or moved.

But the weather improved over the weekend, and temperatures rose.

The coldest Super Bowl was in 1972 in New Orleans, when the temperature was a reported 1.1C.

"We're pretty much weather-proof,'' Broncos coach John Fox said. "We live in Denver, so we practice in just about every element there is."

The match sees the best attack in the NFL in Denver up against the league's best defence in Seattle, while the famous half-time show will feature the Red Hot Chili Peppers and Bruno Mars.