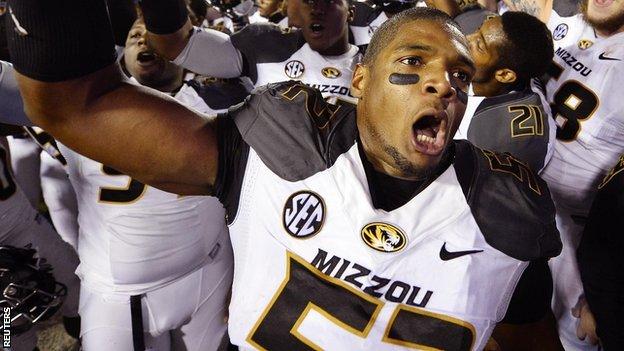 The 24-year-old completed his college football career at the University of Missouri in December and is expected to be drafted by an NFL franchise in May.

Sportsmen who have come out

"I came to tell the world I'm an openly gay man," the defensive lineman told ESPN. "If I work hard, if I make plays - that's all that should matter."

Should Sam be drafted as expected and make an NFL roster in the 2014 season, he would become the first openly gay player to compete in any of North America's four major professional sports leagues - football, baseball, basketball and hockey.

He had revealed his sexuality to his former college team-mates at the University of Missouri's Mizzou Tigers, but admitted doing so publicly was "a weight off his chest".

"I probably may be the first but I won't be the last. And I think only good things will come from this," he added.

In April 2013, basketball player Jason Collins came out during the sport's off-season but was not signed for the next campaign, meaning he never competed as an openly gay player.

Sam is expected to be a mid-draft pick when the NFL's teams hold their annual draft meeting, a process where players from America's college football system are signed for professional franchises.

Former players from the league have come out since retiring, but none have done so during their careers.

In a statement, the NFL said: "We admire Michael Sam's honesty and courage. Michael is a football player. Any player with ability and determination can succeed in the NFL.

Sam's form in his final season as a college footballer saw him named defensive player of the year in the Southeastern Conference, widely considered the top league in college football. His university team mates, who knew he was gay, voted him their most valuable player.

"We look forward to welcoming and supporting Michael Sam in 2014."

Sam, who was born in Texas, was named Defensive Player of the Year in the Southeastern Conference before graduation.

Carolina Panthers running back DeAngelo Williams said a person's sexuality did not matter to him, adding: "I care about winning games and being respectful in the locker room."

NFL hall of famer Deion Sanders tweeted: ''Michael Sam isn't the first gay player in the NFL although he is the first to come out. Let's show him love like a family member. Truth.''

Sam's decision to disclose his sexuality has been welcomed by campaigners and comes at a time when the US government and 17 states have moved to expand gay rights.

Brian Ellner, a gay rights activist said: "We expect the leadership at NFL teams around the country, and the league itself, to wholeheartedly embrace the change that is not only sweeping our nation in the form of law, but also defining our playing fields and culture."