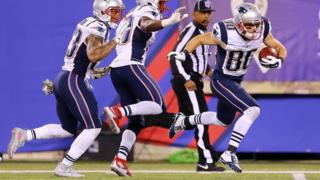 New England Patriots wide receiver Danny Amendola was denied a touchdown against the New York Giants when he was tripped by a team-mate with nothing but open space in front of him.

Amendola runs from his own 11-yard line to within 10 yards of the Giants' goalline when he gets his feet tangled with Duron Harmon.

Despite the trip, the Patriots won the game 27-26 at the MetLife Stadium.