Fans are braced for one of the coldest NFL games in history this weekend when the Minnesota Vikings host the Seattle Seahawks in an NFC Wild Card game.

Daytime temperatures as low as -15C are expected, although forecasters say with wind chill it could feel like -29C.

The coldest NFL game in terms of air temperature was 1967's 'Ice Bowl' between Green Bay and Dallas, which at kick off was -25C (-44C wind chill).

"It is going to be brutally cold," AccuWeather's John Feerick said.

The Vikings say fans attending Sunday's game in Minneapolis are encouraged to bring blankets and "styrofoam, cardboard or newspapers to place under their feet" to prevent prolonged contact with the concrete.

Free hand warmers and coffee will also be distributed.

"Frostbite will occur quickly to any exposed skin and both fans and players will have to prepare accordingly," Feerick added.

"At the same time, we want our fans to be smart and safe when they are supporting the team, and we are taking a few extra steps to assist in that effort this Sunday."

The previous coldest game in Vikings history was played on 3 December 1972, when the air temperature was -18C and the wind chill was -28C.

The Vikings are currently playing at TCF Bank Stadium, home of the University of Minnesota's football team, while a new stadium on the site of the Metrodome, their home from 1982 to 2013, is under construction. 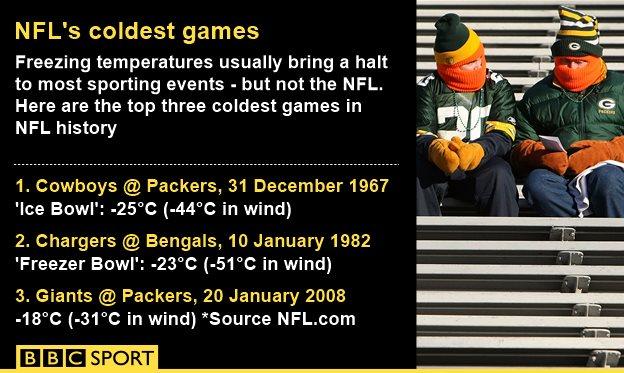