There seems no way to stop the Los Angeles Rams this season as they made it a perfect 8-0 first half of the season with a thrilling 29-27 victory over the Green Bay Packers.

Las Vegas odds makers had the Packers as the biggest underdog ever in the time Aaron Rodgers has been their quarterback, but the two-time MVP and his team produced an inspired performance on both sides of the ball as they pushed the Rams all the way.

Defence was key in a game billed as a shootout between two of the best offences in the league, as Green Bay built a 10-0 lead early on, before coming from behind to lead by a point with just eight minutes left to play.

Both attack and defence has won games for the Rams this season, but special teams finished this one off as Greg Zuerlein's field goal put the team in front before Ramik Wilson forced a fumble on the following kick-off to seal their toughest win of the season.

It is the best start to a season for the Rams since 1969 and they showed everything in their armoury during the game - managing to connect on a fake punt to keep a drive going and also forcing a two-point safety when Packers running back Aaron Jones was tackled inside his own end zone.

Running back Todd Gurley maintained his run of scoring a touchdown in every game so far this season for the Rams - who have been transformed under 32-year-old head coach Sean McVay and his innovative play calling but backed by a squad laden with talent.

It gets no easier for either side as the Packers next take a trip to New England to face the Patriots while the Rams face what could well be a prelude to the NFC title game as they take on the streaking New Orleans Saints.

After the Minnesota Vikings won an epic play-off contest in January, the New Orleans Saints gained some manner of revenge with a 30-20 success for a sixth victory in a row that sets up next week's home showdown with the Rams perfectly.

Quarterback Drew Brees threw for the lowest yardage total in his 13-season Saints career, showing how tough their defence and running game has grown over their fine winning stretch, which has seen them go 4-0 on the road for the first time since they won the Super Bowl in the 2009 season.

Another week and more records for Kansas City Chiefs quarterback Patrick Mahomes, who became just the third QB to have seven consecutive 300-yard passing games as his team beat the Denver Broncos 30-23 to move on to 7-1 for the season.

Future Hall of Fame running back Adrian Peterson rolled back the years with a 64-yard touchdown run as he compiled 149 rushing yards for the Washington Redskins in their 20-13 win over the New York Giants. At 33, Peterson is the oldest player to record a 100-yard rushing game and have both a rushing and receiving score.

Carolina Panthers quarterback Cam Newton destroyed the top-ranked defence in the NFL with three total touchdowns steering his side to a convincing 36-21 victory over the Baltimore Ravens as the 5-2 Panthers remain well in the NFC play-off conversation.

Quarterback Russell Wilson was in sparkling form as the Seattle Seahawks beat the Detroit Lions 28-14 to remain relevant in the NFC wildcard picture at 4-3, while the Philadelphia Eagles regained some glimmer of hope of retaining their Super Bowl title by beating the Jacksonville Jaguars at Wembley.

The Pittsburgh Steelers maintained their dominance over the Cleveland Browns with their 15th consecutive home win against their AFC North rivals - with the Browns losing their 25th straight away game, just one short of the record.

The Cincinnati Bengals showed they are still a good team and moved to 5-3, to sit just behind the Steelers in the AFC North, as their kicker Randy Bullock converted a 44-yard field goal on the final play of the game to beat the Tampa Bay Buccaneers.

Bucs quarterback Jameis Winston gave the Bengals defence a helping hand with a career-high four interceptions before being benched in favour of Ryan Fitzpatrick - who then led a strong fightback that leaves the quarterback situation in Tampa up in the air as he rekindled memories of his stellar start to the season. 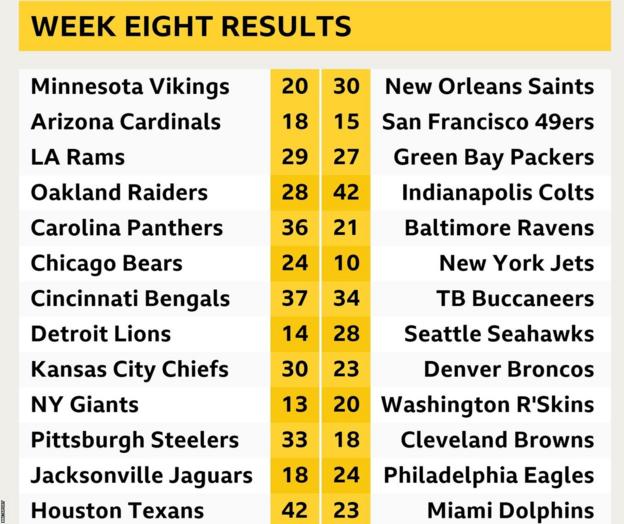 Who was this weekend's MVP?

Even Seattle quarterback Russell Wilson had to get involved in Doug Baldwin and company's touchdown celebration during the Seahawks' victory over the Detroit Lions.

"We did it as a group," said fellow receiver Tyler Lockett. "When one person brings an idea, everybody has to agree in the receiving room, so whenever we finally agree it's 'let's do this, let's do that'."

Wilson was not in on the planning apparently, but as quarterbacks often do, he just had to get in on the action. 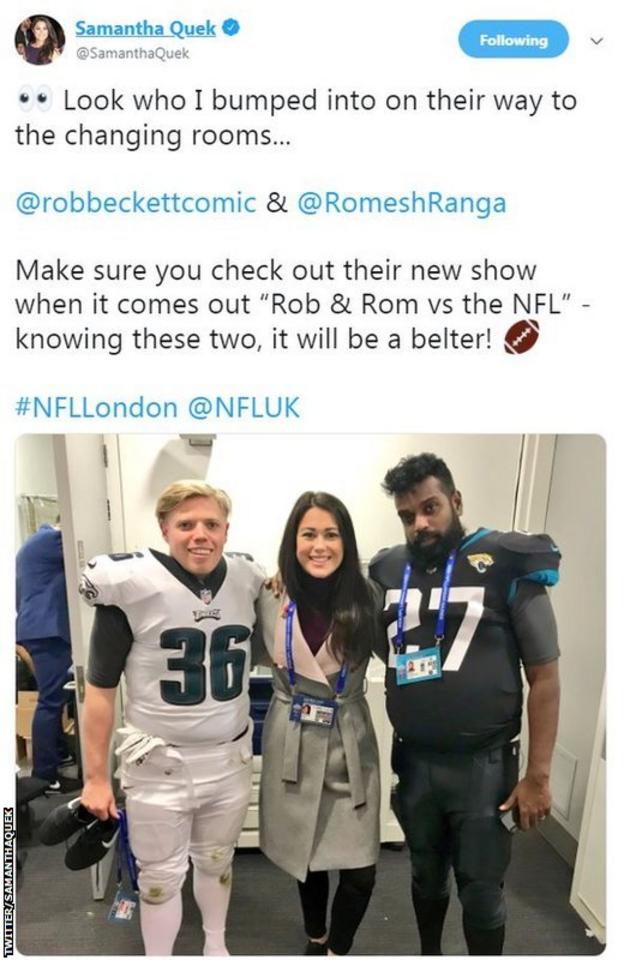 Confirmed NFL fan Sam Quek can often be found at Wembley when the gridiron takes over the national stadium, but we didn't expect to see two top comedians around there - fully dressed to take part!

Rob Beckett and Romesh Ranganathan were all decked out in full NFL pads as part of their new show - they certainly looked the part, though whether they can walk the walk is another question…

Kareem Hunt is making a habit out of hurdling over on-rushing defenders to find the end zone, and he produced another moment of magic for the Kansas City Chiefs against the Denver Broncos on Sunday.

Hunt added a little touch of added sauce on the run this time though as he finished strongly by carrying defenders over the line with him.

Hunt may not look the biggest on the field but he showed he has got strength to go along with his obvious speed as one of the best running backs in the league.