The road to the Super Bowl will go through New Orleans after the Saints won a 31-28 thriller against the Pittsburgh Steelers, who are now suddenly on the brink of missing out on the NFL play-offs altogether.

In a pulsating game played in a deafening atmosphere inside the Superdome, Saints quarterback Drew Brees threw a touchdown pass to Michael Thomas with just over a minute to play to put New Orleans ahead.

Steelers counterpart Ben Roethlisberger, who had helped Pittsburgh overcome a 10-point deficit in the third quarter, then fired his team into range for a field goal only for receiver JuJu Smith-Schuster to fumble the ball to hand the victory to the Saints.

The magnitude of the result for both teams cannot be overstated, as New Orleans are a different side at home with their boisterous fans behind them, while they're also unbeaten in five home play-off games in the Brees era.

"To have that number one seed, this is why you fight so hard," said Brees. "It's nice to have that week off. It's also nice to know that if we keep winning, everything has to come through here and come through us. We like to be in that position. We love playing in the Superdome."

That late fumble could well end Pittsburgh's season after they have looked so comfortable for so long at the top of the AFC North. They have now dropped behind the Baltimore Ravens and need them to slip up against Cleveland next week to stand a chance.

It's a crushing blow for Pittsburgh, who have one of the best sets of attacking options in the league, and came so close to getting a result in one of the toughest stadiums in the NFL. They now need to beat Cincinnati on the final Sunday and hope Cleveland can do them a huge favour.

The New England Patriots earned a scrappy 24-12 over the Buffalo Bills to seal a remarkable 10th straight AFC East title and move into second place in the AFC, which means quarterback Tom Brady and company can earn a familiar week off with a win on the final Sunday next week.

The Houston Texans dropped out of that second place after losing 32-30 to Super Bowl champions Philadelphia Eagles, who continue to cling to life under back-up quarterback Nick Foles but will need a win and a Minnesota Vikings defeat next week to make the play-offs.

Philadelphia lost out on the NFC East to the Dallas Cowboys, who confirmed the division title with a tough 27-20 victory over the Tampa Bay Buccaneers ensuring they will host a play-off game and be a tough assignment for whoever finishes in the wildcard slots.

Seattle Seahawks will be one of those NFC wildcards as they used their home field advantage to beat the well-fancied Kansas City Chiefs 38-31 to secure a play-off spot and also dent the hopes of the visitors of securing top spot in the AFC.

There was nothing wrong with Chiefs quarterback Patrick Mahomes' performance with three touchdown passes and some remarkable throws, but his defence was unable to contain opposite number Russell Wilson, who matched Mahomes' touchdowns and had just two yards less as the pair showcased a similarly brilliant set of skills.

Out-of-work running back CJ Anderson was only signed by the Los Angeles Rams five days ago, but he ran up 167 yards as his new team bounced back from two defeats to crush the Arizona Cardinals 31-9 and move just one win away from a first round bye.

Chicago's tough defence keeps them right behind the Rams as the Bears earned a tight 14-9 victory over the San Francisco 49ers - and in the play-offs defences often have the final say.

Andrew Luck led the Indianapolis Colts to a thrilling 28-27 comeback victory over the New York Giants to set up a huge final-week showdown for the last play-off spot in the AFC against the Tennessee Titans, who beat the Washington Redskins on Saturday.

Play-off picture - as it stands

The Chiefs will seal top spot with a victory next week but if they lose and Chargers win then the two teams will swap places. The Ravens will clinch fourth seed with a win, and the winner of the Titans v Colts game will make the play-offs. The Steelers can only get in with a win and a Baltimore loss or tie in Titans v Colts.

There is just the one place left up for grabs with the Eagles needing a win and a Vikings loss to pinch sixth spot. The Rams will get a bye with a victory but the Bears will finish second if they win and Rams lose. 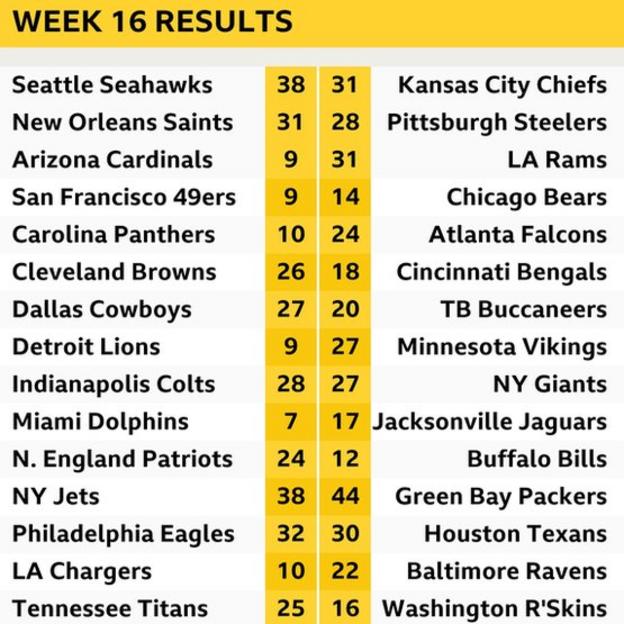 The New Orleans Saints might have the best record in the NFL but head coach Sean Payton doesn't quite have the best dance moves in the league.

Payton has form for pulling out some classic dad dancing - there's even a song called "Hit the Sean Payton" written by a local musician to commemorate his special moves.

And Payton dusted off his skills again after the Saints bagged a first-round bye and home field advantage in the play-offs - we may not have seen the last of these….

If looks could kill

Cleveland Browns quarterback Baker Mayfield was caught on TV giving former head coach Hue Jackson the eyes on the sideline during their win against Cincinnati.

The rookie has been making waves on the field since Jackson was fired by Cleveland, and of fit he's called his former coach 'fake' on social media and criticised him for joining divisional rivals Cincinnati.

Mayfield showed he's not one to change his mind as, during his victory over Cincinnati, he glared over at Jackson for what seemed like forever after making a long play up field - although, showing his media training, Mayfield later claimed he knew nothing about the incident.

"Is Baker Mayfield something or what?" said TV analyst Adam Archuleta.

It's such a great effort that it deserves to be seen over and over again, even though there'll be no record of it in any game log in NFL history.

It's just too good to ignore.