Reigning champions Philadelphia kept their title defence going by scraping into the post-season at Minnesota's expense, while Baltimore kept Pittsburgh out.

The Philadelphia Eagles will just not let their grip on the Super Bowl go as they battled into the play-offs thanks to a 24-0 victory over the Washington Redskins combined with Minnesota's defeat against Chicago.

The Eagles took care of their own business with a dominant display over the hapless Redskins, even with Super Bowl MVP Nick Foles having to leave the game with a chest injury.

Foles did all the damage before his departure, equalling Philip Rivers' record of 25 straight completions in the process, and he said he was hopeful of playing next week in the wildcard round of the play-offs.

Ironically, the Eagles will now face the Chicago Bears in the first round of the play-offs - the same team who got them into the post-season by beating the Vikings in a game Eagles players watched in the locker room.

"It was exciting," said Eagles coach Doug Pederson. "A lot of hard work that just paid off. It's what we set out to do. Obviously on this journey we didn't meet a lot of our goals, but one of them is to get into the post-season and we were able to do that, and so we're excited."

Even if third-string quarterback Nate Sudfeld has to start in Chicago next week, the Eagles insist they are aiming at defending their Super Bowl title.

"We're not sneaking in," said Eagles safety Malcolm Jenkins. "We're here to do some damage."

Quarterback Kirk Cousins is one of the best-paid players in the league but his Minnesota Vikings missed out on the play-offs after a bitterly disappointing 24-10 home defeat by the Chicago Bears - who look a fearsome prospect with their stifling defensive unit.

Elsewhere in the NFC, the Los Angeles Rams beat the San Francisco 49ers 48-32 to make sure they had a week off in the play-offs by earning the second seed, while the Seattle Seahawks grabbed a late 27-24 win over the Arizona Cardinals to set up a play-off showdown with the Dallas Cowboys.

It was a winner-takes-all clash in Nashville as the Indianapolis Colts beat the Tennessee Titans 33-17 to earn the final AFC wildcard spot up for grabs. Quarterback Andrew Luck took his career record against the Titans to 11-0.

The Colts are back in the play-offs after winning nine out of their past 10 games behind Luck's superb quarterback play - he threw three more touchdowns to beat the Titans who were without their starting quarterback Marcus Mariota.

The Pittsburgh Steelers beat the Cincinnati Bengals 16-13 but their players then had to watch the big screens at Heinz Field to see an agonising finish to the game in Baltimore as the Cleveland Browns attempted to upset the Ravens to let the Steelers pip them to the title.

Despite super rookie quarterback Baker Mayfield's best efforts, a late Baltimore interception saw them seal a tense 26-24 victory to claim the AFC North title, punch their ticket to the play-offs and create possibly the shock of the season by eliminating the well-fancied Steelers.

Patrick Mahomes threw a landmark 50th touchdown as the Kansas City Chiefs confirmed their place as top seeds in the AFC by battering the Oakland Raiders 35-3, while the New England Patriots will join them on a bye after a crunching 38-3 win over the New York Jets.

The Patriots then host the highest remaining seed and the Chiefs host the lowest.

The Rams then host the highest remaining seed and the Saints host the lowest. 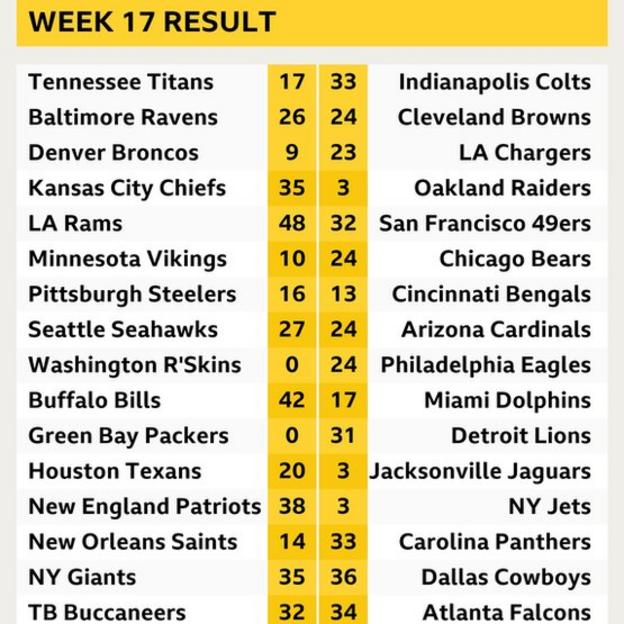 The Houston Texans are only the second team in history to win their division after starting the season 0-3.

Patrick Mahomes joins Peyton Manning and Tom Brady as the only quarterbacks in NFL history to throw 50 touchdown passes in a season.

With 27 touchdown passes, Baker Mayfield recorded the most by a rookie quarterback in the modern draft era, eclipsing Russell Wilson and Peyton Manning's previous best.

Saquon Barkley became just the third rookie in NFL history to run for 2,000 yards in his first season. He also broke the record for catches by a rookie running back with 91 in his debut campaign.

San Francisco's George Kittle broke Rob Gronkowski's record for receiving yards by a tight end in a single season as he tallied 1,377.

Who should be MVP this week? 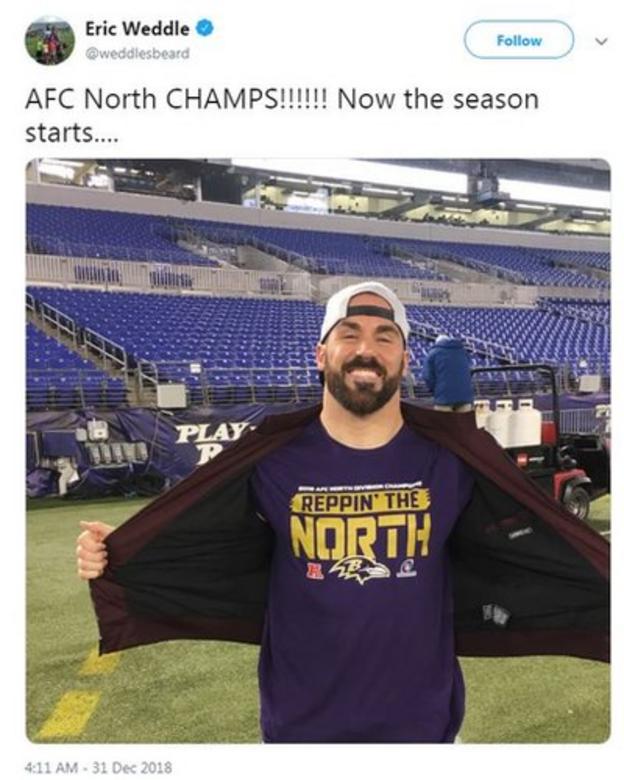 Baltimore Ravens safety Eric Weddle is about to become the most popular member of his locker room as he revealed he will share a $1m bonus he'll receive for the team making the play-offs.

Weddle has a clause in his contract that hands him the bonus if he makes the Pro Bowl and the team makes the post-season in the same year - both of which have come off this year.

Instead of just pocketing the huge bonus payment, though, Weddle says he'll share the wealth with his team.

"I've been thinking about it all week that if it happened, I'm going to do something nice for all my teammates and my coaches because I'm nothing without my team," said Weddle.

"As much as it's for me and my play, my defence helped me get to where I'm at." 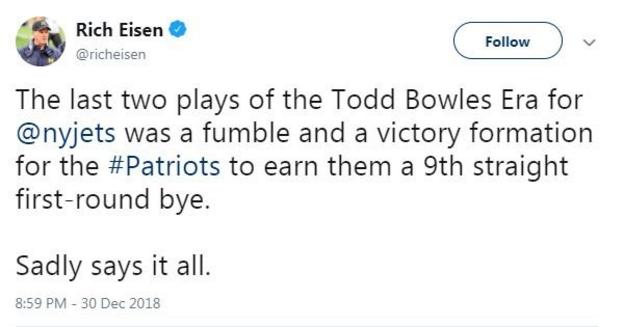 NFL teams don't mess around when it comes to firing head coaches, and the Monday after the end of the regular season usually sees a host of sackings as teams missing out on the play-offs go back to the drawing board.

The New York Jets and Tampa Bay Buccaneers didn't even wait that long as they removed Todd Bowles and Dirk Koetter respectively after disappointing campaigns this year.

Koetter has been in charge since 2015, had a 14-18 record going into the season and came out with just a 5-11 mark despite having one of the best offences in the league - his firing was no surprise.

Bowles was in a similar situation after going 10-22 in his first two years, and after he ended with a 4-12 mark courtesy of a beatdown against New England his taxi was probably waiting for him outside the ground. 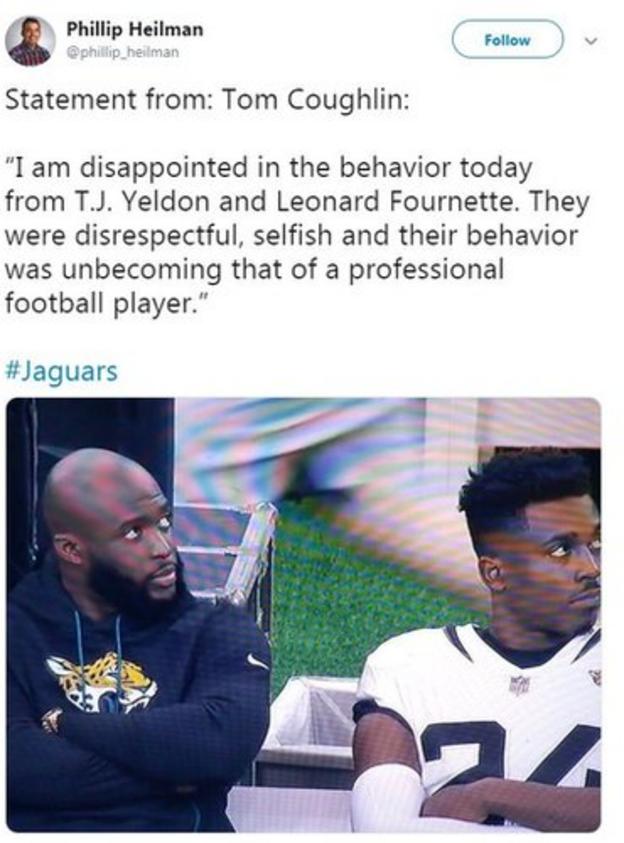 Running back duo Leonard Fournette and TJ Yeldon attracted the anger of the Jacksonville Jaguars as the pair sat on the bench looking uninterested for most of the game against Houston on Sunday - with it looking like the last act for both with the team.

Team vice-president Tom Coughlin did not hold back, saying: "I am disappointed in the behaviour today from T.J Yeldon and Leonard Fournette. They were disrespectful, selfish and their behaviour was unbecoming that of a professional football player."

Yeldon is set to leave when his contract expires in March, while Fournette has had a troubled season with injuries and suspension costing him eight games, and now reportedly up to $7m if the team decide to let him go in the off-season.

Fournette being suspended reportedly voided a term in his Jaguars contract that entitled him to the guaranteed bonus even if he is released, and that news obviously has not gone down well with the player judging by the look on his face on Sunday.