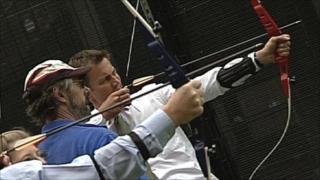 Archery became the first sport to be hosted at the Houses of Parliament when MPs and peers swapped their briefcases for bows on Speakers' Green on Monday.

Culture Secretary Jeremy Hunt joined in the event, which was one of several novel archery initiatives taking place this year to help celebrate the sport's 150th anniversary - and promote its profile ahead of the London 2012 Olympics.