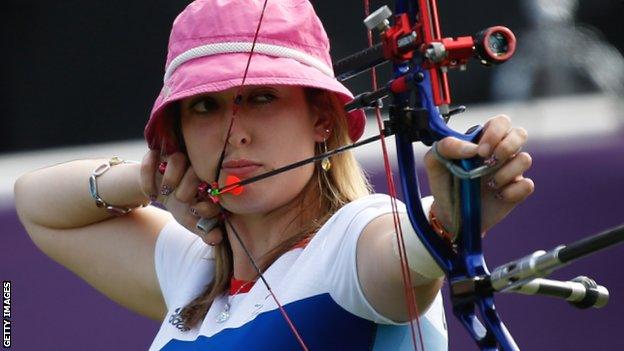 Following a classification test at the World Championships in November last year Brown, 25, was informed she was no longer eligible for disabled events.

She suffers from complex regional pain syndrome - giving her chronic pain in her feet - but World Archery said it did not impact on performance.

Brown was granted a re-test this month, but the outcome was unchanged.

It means she will be unable to compete in disability archery events from 1 April 2014 and her UK Sport athlete funding will soon end.

Although I can continue to compete in able bodied competition I still have to live with my disability and the funding support I have received as a Para Archer will come to an end, making life much more challenging

"I am obviously very disappointed with the outcome," she said.

"My disability has stopped me doing so many things in my life and archery has been the one thing that gave me focus and purpose.

"Winning gold at London was one of the best moments in my life and now, 18 months later, its heart breaking to learn that I cannot defend my Paralympic title."

The archer won her maiden Paralympic gold medal at the 2008 Beijing Games, before securing victory as part of the English able-bodied team at the 2010 Commonwealth Games in Delhi.

Brown has previously stated that she is not interested in switching from the compound bow to a recurve bow - and attempting to qualify for the Olympics.

She will be permitted to compete in able bodied and open archery competitions using her stool as an assistive device, however, she feels this is little consolation.

"Although I can continue to compete in able bodied competition I still have to live with my disability and the funding support I have received as a Para Archer will come to an end, making life much more challenging," said Brown.

The archer has been working with the British Athletes' Commission and solicitors Lewis Silkin over the past few months and says she will continue to explore options with them in the hope that an appeal directly to the International Paralympic Committee (IPC) may be possible.

"We will continue to support her at this very difficult time and transition funding has been offered. We believe Danielle still has an important role to play in archery."

Brown has competed only once since learning of World Archery's rule changes in November, finishing 17th at the able-bodied European Archery Festival in Telford.