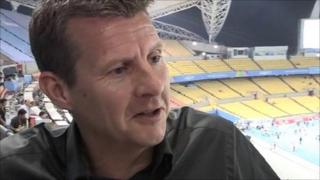 BBC Sport's Steve Cram, Great Britain's first world athletics champion in 1983, hails the achievement of Mo Farah in becoming the first ever British male to win a distance title [5,000m or over] at the World Championships.

Cram admits to having felt a little emotional as he watched Farah triumph in the 5,000m, a week after being pipped for the 10,000m gold in Daegu, South Korea, and talks about the pressure on Farah with less than a year to go to the London Olympics.