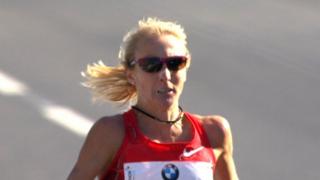 Britain's Paula Radcliffe finishes third at the Berlin marathon with a time inside the London 2012 qualifying mark, but admits she is disappointed to finish behind winner Kenyan Florence Kiplagat and Germany's Irina Mikitenko.

The 37-year-old Radcliffe, who was competing for the first time since finishing fourth in New York in 2009, finished in a time of two hours, 23 minutes and 46 seconds, her fastest since 2007.