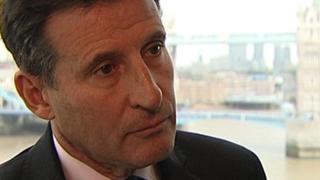 London 2012 chairman Lord Coe says there are "strong advantages" to bringing the 2017 World Athletics Championships to London, five years after the Olympic Games are staged in the city.

An evaluation commission from world athletics governing body the IAAF - of which Coe is a council member - to meet representatives from the British bid, before a vote to decide the host city on 11 November.

Coe also says he is confident London's bid will not be affected by the legal battle over the long-term future of the Olympic stadium.