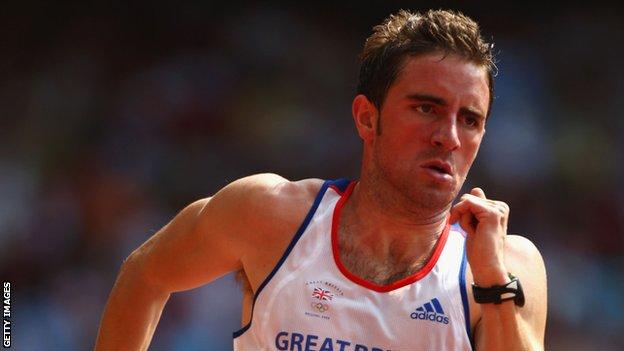 Great Britain 400m runner Andrew Steele is targeting a medal at London 2012 after recovering from illness.

The 27-year-old spent three years after the last Olympics struggling with injuries and glandular fever.

Asked if he can win a medal, he told BBC Radio Manchester: "I'm going to say yes. You never know because athletics is so fragile with form and injury.

"If I can run close to my best, or even a little bit better in London, then I put myself right up there."

At Beijing the Manchester-born runner ran 44.94 seconds in the 400m semi-final and was part of the 4x400m team that finished fourth in the relay.

After a groin injury ruled him out of the 2009 season, Steele was then diagnosed with Epstein-Barr virus, also known as glandular fever, in 2010.

The son of Dr Chris Steele, the health expert on ITV's This Morning, Steele has previously spoken of the difficulties of trying to be a professional athlete with the illness.

Now back in full-time training and competing, Steele is hopeful he has managed to overcome the virus.

"I've managed to shake this glandular fever, this viral fatigue based illness, and that was the real issue for me," he added.

"Other injuries and so on you can always deal with. As an elite athlete you get injuries, however the fatigue based illnesses are where it's really a problem.

"That just sapped me of my ability, it withdrew my ability to run at an elite level.

Andrew Steel is 'In the Spotlight' on BBC Radio Manchester on Thursday, 2 February at 1800GMT talking about his life and career. If you miss the show you can listen again via the iPlayer or download the podcast.