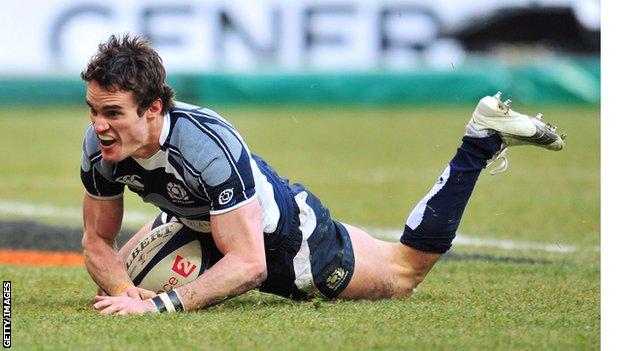 The 26-year-old has been training with Margot Wells, wife of former Olympic champion Allan, and will race at the Kelvin Hall on 19 February.

"I am looking forward to running in Glasgow," he said.

Evans was forced to retire from rugby following a serious neck injury in February 2010.

The former Scotland winger, who earned 10 caps, would eventually like to compete in the 2014 Commonwealth Games.

"At the moment I am simply gaining some race experience in the 60 metres," he told the scottishathletics website.

"It's all new but I am enjoying that and the idea is to build some basic sprinting fitness.

"When I played there for Glasgow Rugby we used to do warm-ups in the Kelvin Hall in the winter so I am familiar with the arena and the track."

Zimbabwe-born Evans suffered a slipped neck vertebra during a Six Nations match in Cardiff and, despite two operations, was forced to give up the sport.