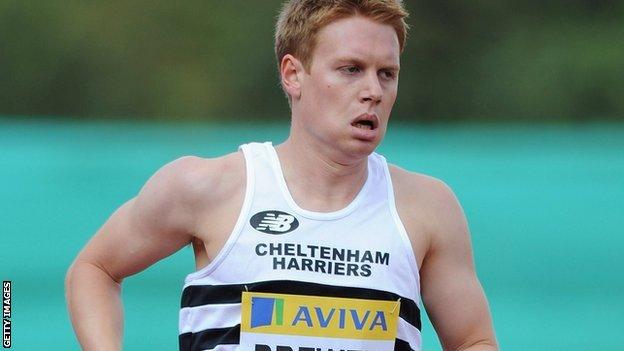 Cheltenham's James Brewer believes he will be back to his best at the Aviva Grand Prix on Saturday.

The middle distance runner had an indifferent 2011 season after a series of injuries the previous year.

But after retuning to full fitness, Brewer will race in the 1500m at the indoor competition in Birmingham.

"It's really great to be back thinking I can win this race rather than worrying about it," the 23-year-old told BBC Gloucestershire.

"For a long time I wasn't competitive and I was going into races almost dreading it. I wasn't worried about winning the race, it was more about getting round.

A former gymnast, Brewer started his career running in the 800m before moving to 1500m races

"I ran in the National Indoor Championships at the weekend and I finished second, although I was leading until five metres before the line. But from where I was a year ago it was a brilliant step forward so I can't be too disappointed with it."

Tipped as one to watch as a teenager, Brewer's breakthrough year came in 2009 when he represented Britain at the World Championships in Berlin.

But after his lengthy injury lay-off he has been forced to rebuild his career.

Brewer is currently focused on his indoor racing but is also in contention for a place at the London Olympics - although selection could prove difficult.

"In my eyes the hard thing is going to be running the time, as no British athlete did it last year, which shows you how tough the standards are," he explained.

"On top of that, you've got to do it by the middle of June.

"My plan is to run a good indoor season. I'll hopefully go to the World Indoors and run well and I should then get invited to the quick races in the early season that will allow me to get that time.

"It's going to be a tall order but I've got to hope that I can do it."