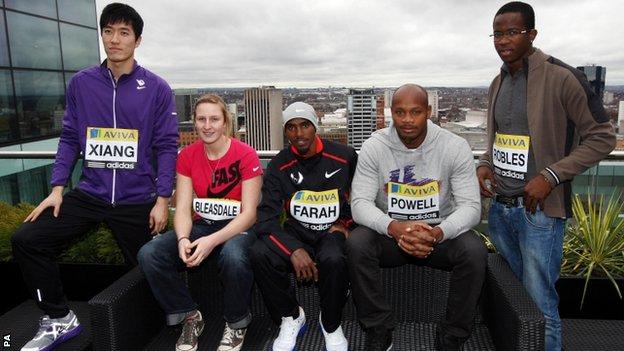 Jamaican sprinter Asafa Powell will continue his first indoor season since 2004 at the Aviva Grand Prix in Birmingham on Saturday.

The 29-year-old former world record holder is looking to find his form early ahead of this summer's Olympic Games in London.

"Whatever we need to do to get ready and get in shape, we'll be doing it. Definitely I have to work harder."

Powell will be up against World Championship bronze medallist Kim Collins and Britain's Harry Aikines-Aryeetey in the 60m at the National Indoor Arena, with Jessica Ennis, Mo Farah and 100m hurdlers Liu Xiang and Dayron Robles also on show in Birmingham.

Yohan Blake's stunning victory at the World Championships in South Korea last year saw Powell, absent with a groin injury, slip to third in the pecking order of Jamaican sprinters behind Blake and Usain Bolt.

"People are still talking about me but it's just another person (Blake) has been added to the table," said Powell. "It's no big deal for me. People will talk about me and always will.

"I'm kind of a laid-back person and I don't really let things affect me too much, so it didn't take very long to get over Daegu."

Ennis will compete in both the 60m hurdles and long jump in Birmingham as she prepares to defend her pentathlon world title in Istanbul next month, while Farah will run in the two-mile event.

Bleasdale will compete with new, longer poles on Saturday after deciding against using them at the nationals in Sheffield last weekend, despite trying them out in during warm-up.

"It didn't quite go to plan, my technique was a bit scrappy, so we decided not to risk going off the longer poles," she said. "But we're definitely going to use them [on Saturday]. I had a session yesterday with them and it went well, so that was a big confidence boost."

The 20-year-old is currently third on the indoor all-time list after her vault of 4.87m last month.

She added: "We've spent all winter on my technique. Last year my technique wasn't that good and it still isn't great. It's a positive thing that I've got more to work on. In the next three or four years I can perfect my technique and hopefully jump a lot higher."

Xiang of China and Cuba's Robles will meet for the first time since last summer's 110m hurdles final at the World Championships.

The 25-year-old Cuban, who set the world record of 12.87 seconds in Ostrava four years ago, said: "This year is clearly important for me. I'm doing everything I can, both in and out of competition, to make sure that I'm competing at my best.

"I'm planning to run at the World Indoor Championships and, of course, I want to hold on to the Olympic title. We'll need to see what the other guys bring to the race."

Xiang returns to the National Indoor Arena for the first time since 2003 looking to close the gap on Robles and absent American David Oliver ahead of next month's World Indoor Championships in Istanbul.

"I hope the speed gap in the first half between Robles, Oliver and me can be shortened and then my confidence will be strengthened in the outdoor races," said the Chinese athlete.