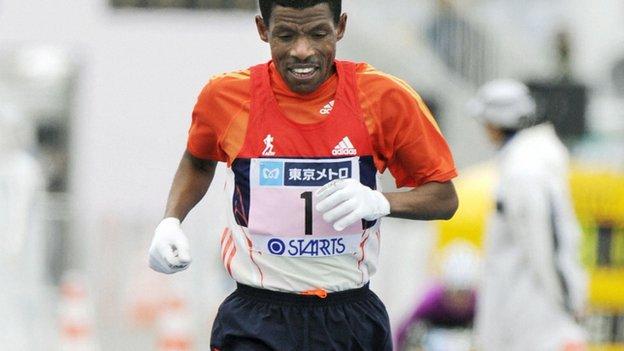 Former marathon world record holder Haile Gebrselassie has suffered a setback in his bid to qualify for London 2012.

The Ethiopian was fourth in the Tokyo Marathon on Sunday with a time of two hours, eight minutes and 17 seconds.

He was aiming to run under 2:05 to convince the selectors of his place.

"I felt fantastic for the first 30 kilometres but then I had some problems at the end of the race," said the 38-year-old.

Despite the setback, Gebrselassie, who has insisted he is not going to retire as he is desperate for a place at London 2012, said he would not give up on the Olympics.

"I could run another marathon in two weeks," added the two-time Olympic and four-time 10,000 metres gold medallist.

The pressure is on Gebrselassie to break the 2:05 barrier after three Ethiopians ran under that time in Dubai last month.

Gebrselassie's marathon world record of 2:03:59 was bettered in September by Kenyan Patrick Makau, who won the Berlin Marathon in 2:03:38.