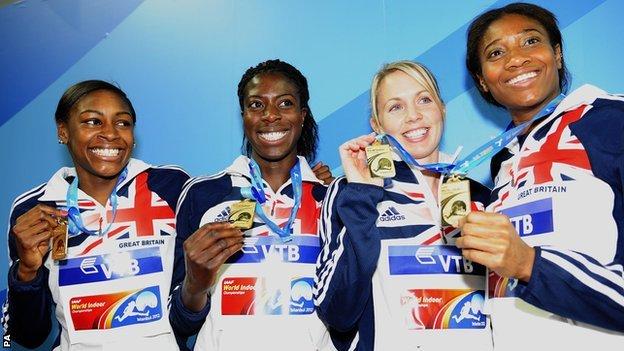 Great Britain's women's relay team won gold in the 4x400m in thrilling style on the final day of the World Indoor Championships in Turkey.

GB's total of nine medals is their best ever at a World Indoor Championships.

That surpasses their previous highest medal haul of seven, set in Birmingham in 2003.

Ohuruogu, the 2008 Olympic 400m champion, received the baton on the third leg while in third position but superbly made up ground to hand over to Shakes-Drayton in first.

Shakes-Drayton impressively held off individual World Indoor champion Sanya Richards-Ross in the final leg, lunging for the line to claim top spot ahead of the American. Russia finished third.

Yamile Aldama won gold in the triple jump, but Mo Farah missed out on a medal in the 3,000m.

There was controversy in the men's 4x400m relay as the GB team of Conrad Williams, Nigel Levine, Michael Bingham and Richard Buck were promoted to a gold medal after the United States were disqualified, only for that decision to be reversed on appeal.

In the women's long jump American Brittney Reese took the crown with an impressive 7.23m on her final jump.

Proctor had equalled her British record of 6.86m in the third round before extending it by three centimetres to claim bronze behind Reese and Janay DeLoach.

The Anguillan-born athlete said: "Getting a bronze amongst all those great jumpers, I'm happy to wear this [British] vest. I'm feeling great, I can't ask for anything more."

There was a surprise medal for 24-year-old Osagie, who took bronze in the 800m despite struggling with injury in recent months.

Bleasdale secured third place in the pole vault on her first major senior event with a best of 4.70m, behind Russia's two-time Olympic champion Elena Isinbaeva and Vanessa Boslak of France.

In a hard-fought high jump competition with eight men all jumping over 2.31m, Robert Grabarz finished outside the medals in sixth with a best of 2.31m. Greece's Dimitrios Chondrokoukis recorded a personal best of 2.33m to win gold ahead of reigning Olympic champion Andrey Silnov of Russia.

Andrew Pozzi capped an impressive debut World Indoor Championships by finishing fourth in the 60m hurdles. The 19-year-old, who ran personal-best times in the run-up to the final, clocked 7.58 as America's Aries Merritt claimed victory in 7.44. Xiang Liu of China and France's Pascal Martinot-Lagarde trailed.

Neither of Britain's young female sprinters were able to impress in the 60m, with Asha Philip and Jodie Williams both failing to qualify for the final.