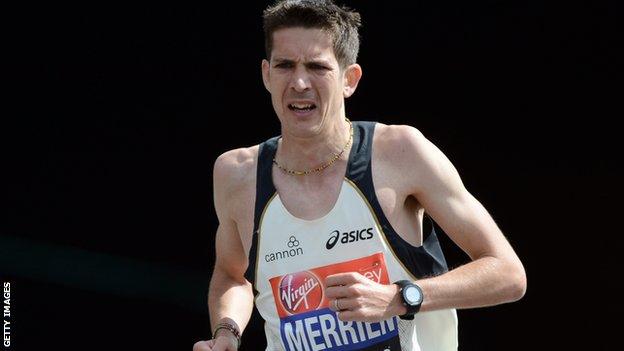 An online campaign has been set up to persuade Team GB to select Lee Merrien for the Olympics.

The 31-year-old marathon runner missed out on selection for London 2012 as he did not run under the 2:12 qualifying time at the London Marathon.

Cara Saul has launched a Facebook page to persuade selectors to pick the him.

"He's the fastest British man to run a marathon this year, gets over the line and someone says 'you're not selected', I couldn't believe it," she said.

"I'm a middle-aged fat lady who was sitting there watching the television and I just got totally sucked in by how marvellously Lee ran."

Merrien was forced to run the 'A' standard qualifying time of 2:12 because fellow British runner Scott Overall ran under the time in October's Chicago Marathon.

Dave Webb, who has not run under 2:12, has been picked after finishing in the top 20 at last year's World Championships.

Merrien ran a personal best of 2:13:41 to be the top British finisher in London.

But Buckinghamshire-based Mrs Saul says Merrien has inspired youngsters, such as her daughter, to take up sport and should be picked.

"She's not a huge athlete but she's so inspired by seeing people like Lee that she's going out doing activities," she added.

"How many people can get 13-year-old girls to go out and run?

"People like Lee are an example and they're the real legacy of the Olympics and it's just shocking that we are not putting him in that third slot.

"We've paid a lot of money for these Olympics, the marathon is the open event, the people's event, everyone loves the marathon.

"If you've got three spots for the marathon and you say 'we're only going to send two people and we're not going to send the fastest person this year', that is rather silly."