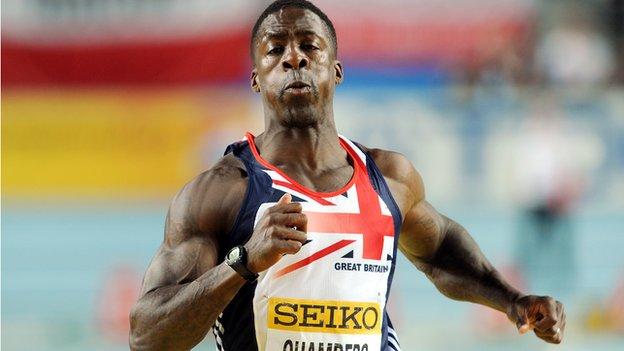 The British Olympic Association's (BOA) lifetime Olympic ban for drugs cheats has been overturned. But whilst the media focuses on British sprinter Dwain Chambers, I don't think it's really about him.

When a law is rescinded, it affects everybody - Dwain simply crystallises a wider issue.

Some athletes don't like the outcome of the World Anti-Doping Agency (Wada) case because they're competing at their best within the rules and trying to do it the right way.

But the authorities are allowing athletes who haven't done it the right way a route back into the sport. The athletes have got to be careful about letting that type of thing affect them.

I remember back in my day Christine Benning, a really good 1500m runner, chose not to go to an Olympics because she said: "All these Russians and Germans are cheating and I can't beat them." You can't think like that as an athlete because you'll have no chance to do well.

In years gone by, without naming names, there were people in the British team or from other nations that you suspected were not playing by the same rules as everyone else. But you can't let that affect you, you're there to compete in your event.

Whilst the issue has divided opinion within the British camp, I don't expect it to have any lasting effect on the dynamic of the group come Games time.

Often when you go away together, you don't mix as much as people might think. You speak to the people you get on with - a bit like going away on a school trip. You have your clique of friends and there might be some you don't get on with, but it doesn't spoil your trip. The athletes are there to do a job.

A lot of people I've spoken to don't understand why Wada has chosen to take on this battle against the BOA when it is meant to be protecting the rights of the everyday athlete.

Disappointingly, the only rule Wada has in place for drugs cheats is a two-year ban which, in my view, is very little deterrent for serious drug offences.

Yes, they've taken a safe legal stance, but they've got a weak case when it comes to taking the moral high ground.

If you commit an offence in society, for example, shoplifting, you'd go to court and there would be a penalty associated with that offence. There is also likely to be a penalty from your employer who could sack you on the basis of that offence.

In this case, there is one penalty for the offence within the context of what has been committed - namely Wada's two-year ban - but there is also another penalty for the effect it had on the British sporting movement: the BOA's sanction of a lifetime Olympic ban.

It's a shame Wada has taken it away. I don't see why a company, or an organisation, or in this case the BOA, doesn't have the right to decide who represents it and who doesn't. Why is sport not bound by the same rules as society?

Wada is the authority for whom we all rely on in sport to give us a level playing field, so the deterrent has to be stronger than it is currently.

Offering people a second chance, as they have done, is much less important than having a strong stance on drug taking.

Who is protecting the rights of the ordinary athlete? Where's the second chance for the people who haven't been able to win medals because their competitors were cheating? Or the people who have been denied a place in the Olympic team in favour of former drugs cheats? Who's defending them?