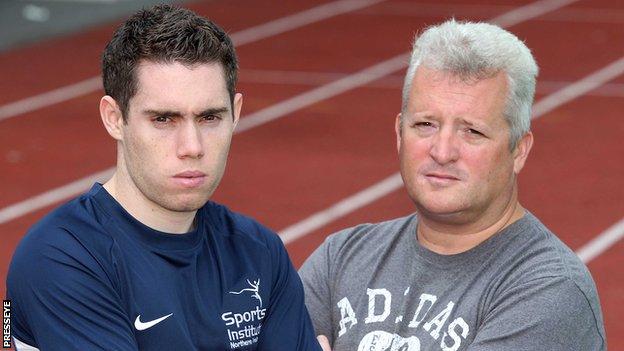 Paralympic star Jason Smyth must continue his search for the Olympic 100m standard after being outside the qualifying time at a meeting in Florida on Saturday.

The Northern Irishman is aiming to compete at both the Olympics and Paralympics this year.

The Eglinton man will race again at his regular training base in Clermont next weekend before a scheduled outing at the Diamond League meeting in New York a week later.

Smyth trains in Florida with a group of world-class athletes including American star Tyson Gay.

Meanwhile, Letterkenny athlete Mark English made a major breakthrough as he clocked 1:45.77 for 800 metres at a meeting in Belgium on Saturday night.

As well as improving his own Irish junior record by 1.32 seconds, English's time was a European Championship qualifying standard and only .17secs outside the Olympic Games mark.

Competing at the same meeting as English, Waterford woman Barr clocked 56.16 in the one-lap hurdles which was almost a second inside the European Championship standard.

Limerick runner Drumm clocked 4:09.05 to cut over three seconds off her 1500m personal best at a meeting in Dessau, Germany.

At the same German meeting, sprinter Steven Colvert clocked 20.78 for the 200m which was just .01secs outside his personal best as he won the event.

Meanwhile in the USA, Olympics-qualified pole vaulter Tori Pena cleared 4.50m which was just .02cm short of her Irish record.