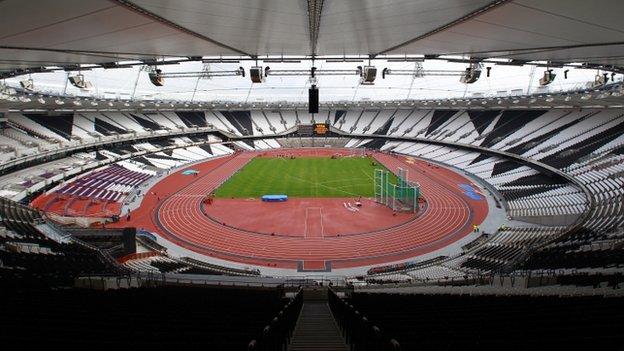 The 18-year-old Londoner ran the second fastest time by a European athlete this year - 10.08 seconds - easily inside the qualification mark of 10.18.

He is the second Briton to achieve the standard this year after James Dasaolu.

"Adam Gemili, a former semi-professional footballer with Thurrock, has raced to the top of the British rankings at 100m with times of 10.11 and 10.08 at the Sparkassen Gala in Regensburg. Adam, who won't be 20 until until next year, is a now clear tenth of a second quicker than any other British man this year and is just 0.02 outside the UK junior record of Dwain Chambers which has stood since 1997. Both of his times are well inside the London Olympic A standard, so he if he finishes in the first two at this month's Olympic Trials then he will automatically be selected for Team GB"

It means the likes of Dwain Chambers, who runs in France on Sunday, could have their work cut out to make the London 2012 team.

Christian Malcolm also achieved an A standard for the 200m with a time of 20.46 secs, his fastest since winning silver at the European Championships in 2010. Anyika Onuora ran the A standard in the women's 200m by clocking 22.93.

Gemili began the meeting in Regensburg very well, clocking 10.11 in the heats, before going even faster in the final.

He smashed his previous best of 10.23 to become the second fastest British junior of all time, overtaking former world junior champion Mark Lewis-Francis, with only Chambers' time of 10.06 set back in 1997 ahead of him.

France's Christophe Lemaitre is the only European to have gone faster than the Blackheath and Bromley athlete this season.

Gemili is also a promising footballer, having been a member of the Dagenham and Redbridge Academy squad last season and playing on loan at non-league Thurrock.

The GB trials take place in Birmingham from 22-24 June. According to UK Athletics, athletes need to finish in the top two of their race and have reached the A standard to be assured of their place on the team.