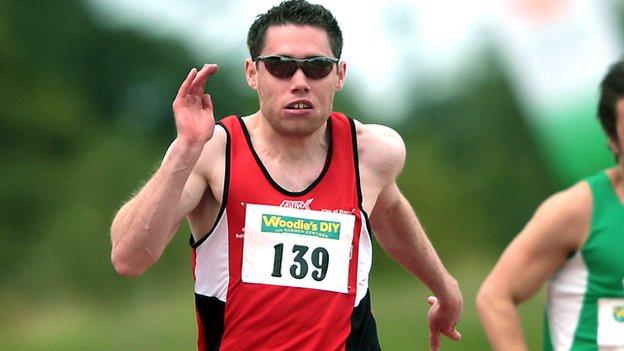 Paralympic star Jason Smyth was again outside the Olympic 100 metres qualifying standard at a meeting in Florida on Saturday.

The Northern Irishman is attempting to become the first track and field athlete to compete at the Paralympics and Olympic Games in the same year.

Smyth, whose best is 10.22, was racing at his training base in Clermont.

The double Paralympic gold medallist from Beijing ran over 200m later in the day but, with the track very wet following a thunderstorm, he clocked 21.25 which was .31secs outside his personal best.

Smyth, 24, has been based in Clermont for the last three winters and springs and his fastest times have all been set at the Florida track.

Indeed, Smyth produced his fastest ever 100m at Clermont last weekend but his 10.17 was ruled out by an illegal wind reading

The maximum permissible wind reading is two metres per second but the speed last weekend was 3.6.

He set his legal personal best of 10.22 at the Florida venue a year ago and the track is regarded as one of the fastest in the world.

Like Oscar Pistorius, the Northern Irish sprinter is chasing a piece of athletics history by competing at both the Paralympics and Olympics later this summer.

Smyth's next outing is likely to be at the European Championships in Helsinki later this month [27 June-1 July] with the qualification deadline for the Olympics 8 July.