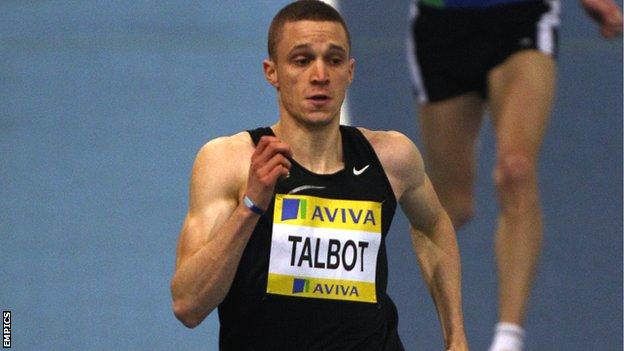 Danny Talbot has said he is confident of success at the Great Britain Olympic trials after making a successful return from injury.

The 21-year-old from Trowbridge returned to the track last week after a series of hip and back problems.

He came first in the 100m and 200m at the European classic meeting in Slovenia, and won the 200m at the England U23 championships on Sunday.

"It will stand me in good stead for the trials," Talbot told BBC Wiltshire.

"Having the race in Slovenia last week and then Bedford on Sunday was good for my fitness. It was about getting through the three rounds uninjured rather than running an amazing time.

"The 100m in Slovenia was really pleasing as it showed I hadn't lost any speed. There's a lot of progression as my time in Slovenia is better than my time in Russia last year.

"The speed is still there and getting through four 200m in four days was very pleasing for me because I haven't had much training because of niggles here and there."

Talbot will compete in the 200m at the 2012 trials in Birmingham this weekend, where he hopes to secure his place for this summer's Games.

He has also been named in the provisional Great Britain squad of 109 athletes for the European Championship in Finland, where he is set to compete in the 4x100m relay.

Talking about the prospect of qualifying for London 2012, Talbot added: "There aren't words to describe it. I'm just over the moon I've been selected for the Europeans.

"I've been dreaming about this since I found out about London having the Olympics.

"I'm just very grateful to have the opportunity and hopefully I'll be able to take it and just go from there.

"Hopefully I can do what I know I'm capable of and make the team."