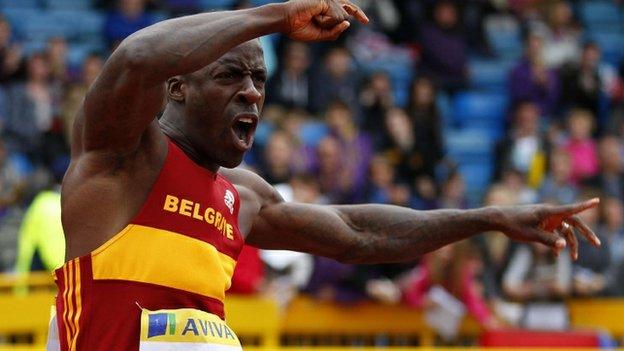 Dwain Chambers has not been selected to compete in the 100m at the European Athletics Championships in Helsinki.

But his omission suggests he will represent Team GB at the Olympics.

Chambers won the Olympic trials at the weekend but failed to make the 'A' standard time that would have guaranteed his London 2012 selection.

The 34-year-old became eligible for the Games after the British Olympic Association's policy of lifetime bans for drug cheats was overturned.

Unless Harry Aikines-Aryeetey and Mark Lewis-Francis do something spectacular, Dwain Chambers has as good as booked his London 2012 ticket. He might not have run an 'A' standard this season, but he clocked one in May 2011. That, with his trials win, should do it. And he is not alone in having to rely on his back catalogue: he is just the most controversial. But the fact Chambers is in the relay in Helsinki, suggests UK Athletics thinks he is worth the trouble.

He tested positive for the designer drug THG in 2003 and was given a two-year ban.

Chambers has been selected in the squad for the 4x100m relay.

Chambers, who has been picked for the 4x100m relay squad in Finland, won the 100m trial in Birmingham in 10.25 seconds - seven hundredths of a second outside the 'A' qualification time he required.

However, he ran A-standard times last summer - and selectors can take those times into account.

Former world youth 100m champion Harry Aikines-Aryeetey, who finished seventh in the trials with a time of 10.47s, and Commonwealth Games and European silver medallist Mark Lewis-Francis, who was sixth with 10.44s will represent Britain in the 100m in Finland.

After the trials, Chambers said: "I would like to be selected outright. If there's a way the selectors can look on my history I will gladly take that opportunity, but hopefully I am able to secure the qualifier in Helsinki."

Other athletes such as Andy Turner and Michael Rimmer, who finished third in the 110m hurdles and 800m respectively at the trials, and Lisa Dobriskey, who was second in the women's 1500m, have also been left out of the squad for the European Championships, suggesting they are likely to be awarded discretionary places in the Olympics team.

World 5,000m champion Mo Farah has been selected in that event, as it fits in with his training programme in the run-up to the Games, while 2009 World Championships 800m bronze medallist Jenny Meadows, who missed the trials through injury, is picked. She still needs to prove form and fitness ahead of the Games.

Abi Oyepitan, who withdrew from the 100m trials final at the last minute, is selected in the 200m.

High jumper Robbie Grabarz, who recorded what was then the highest outdoor jump of the year of 2.33m at May's Diamond League meeting in Rome, will also compete in Finland despite securing his Olympics spot.