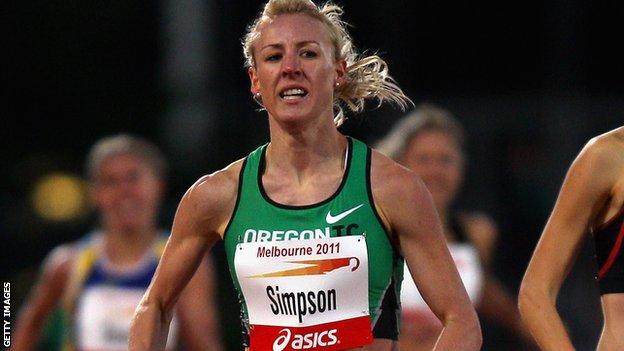 Cornwall 800m runner Jemma Simpson is hoping to run the 'A' qualifying standard for London 2012 at this week's European Championships in Helsinki.

Simpson was second in the British trials last week but has yet to run the sub-two minute time needed to force her way into Team GB.

UK Athletics are obliged to pick the top two in the trials of they run the Olympic qualifying standard in 2012.

There are five runners who could take up the three spaces on the GB team.

Marilyn Okoro and Emma Jackson have run the 'A' standard this year but finished fifth and seventh at the trials, which were won by Scotland's Lynsey Sharp.

Jenny Meadows, who won bronze at the 2009 World Championships,

"I want to go and run the a standard because I was second in the trials," Simpson told BBC Radio Cornwall.

"I have two 'A' standards from last year and that should be enough to select me for the team for the Olympics."

If Simpson fails to get the 'A' standard she will have to hope that she is picked by Team GB on her merits but with so many other athletes in contention that might prove difficult.

And she says that injury contributed to her not winning the trials last week.

"I just didn't have that final 50m that I needed and that was probably because of a lack racing and being a couple of weeks behind in my training," she said.