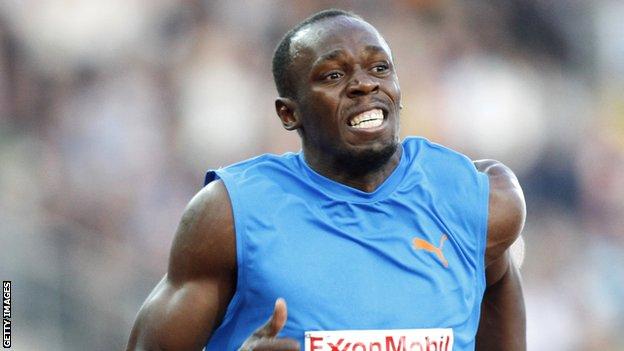 Jamaican trio Usain Bolt, Yohan Blake and Asafa Powell are a step closer to booking their place at the Olympics after easing into the 100m semi-finals at the national championships.

Defending Olympic champion Bolt clocked a time of 10.06 seconds to win the first of the day's four qualifiers.

The only man to go faster than him was reigning world champion Blake, who ran 10.00 in the second heat to advance.

"When the gun went off to signal a false start in Usain Bolt's heat, a loud collective gasp shook the national stadium. Had the unthinkable just happened?

"But after a firm 'no' was established - Bolt was nowhere near a false start - the fastest man in the world was a vision of relaxation as he cruised down the 100m.

"Jamaica's big three looked so comfortable you had to remind yourself that our UK trials 100m final was won - albeit in very different conditions - in 10.25 seconds."

The semi-finals and final are scheduled for Friday night at the sold-out National Stadium in Kingston. Only the top three qualify for London 2012.

Reigning world record holder Bolt, who won Olympic gold in the 100m, 200m and 4x100m relay at the 2008 Games in Beijing, holds the fastest time in the world this year after clocking 9.76 in Rome last month,

Dwain Chambers won the British trials in a time of 10.25, while five men broke the 10-second barrier at the US trials, with Justin Gatlin and Tyson Gay qualifying for London with 9.80 and 9.86 respectively.

Powell said he did not push the pace on Thursday but plans to "go all out" in the semi-finals and final. Bolt and Blake both declined to comment to reporters after their races.

Nearly 400 Jamaican athletes are competing for about 60 berths in London in what could be the largest athletics delegation ever sent to an Olympics by the Caribbean nation.