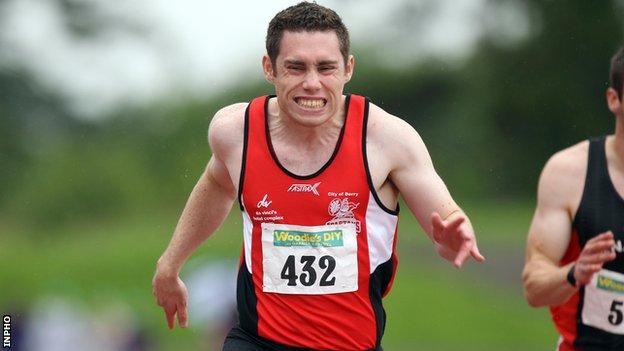 Jason Smyth's hopes of competing in the Olympics appear over after he missed out on the 100m standard in his last chance before the London deadline.

Smyth was beaten by Paul Hession at the Irish Championships and the Derryman was again some way outside the Olympic standard of 10.18.

Smyth will have to content himself with a place at the Paralympics where he will defend his 100m and 200m titles.

Helped by a one metre per second following wind, the Derryman got a great start in the final but was overhauled by Olympics-bound Hession in the final stride.

City of Lisburn's Amy Foster won the women's 100m title while there were silver medals for Paul McKee and Jason Harvey in the 400m and 400m hurdles.

Earlier, Smyth had clocked 10.40 to win his heat at Santry.

The Derryman clocked times of 10.63 and 10.47 in Loughborough on Saturday.

After running 10.24 in his opening race of the season in the US in May, the visually-impaired Smyth's performances have deteriorated in recent weeks and he clocked 10.47 and 10.52 at the recent European Championships.

Meanwhile, Derval O'Rourke missed the women's 100m hurdles final because of a muscle spasm after clocking times of 13.20 and 13.23 in Loughborough on Saturday.

The injury could be a worry for the Cork athlete ahead of the Olympic Games where her challenge is scheduled to begin on 6 August.

Letterkenny athlete Darren McBrearty had to be content with third in the men's 1500m after being overhauled by winner Colin Costello and Eoin Everard in the closing 50 metres.

Joanne Cuddihy was named athlete of the meeting after winning the women's 400m in a superb 51.89 which added to her 200m victory on Saturday.

Steven Colvert was chasing the 200m Olympic standard of 20.55 in Saturday's opening day at the Irish Championships but suffered heartbreak as he was denied by an illegal wind reading.

The Dubliner clocked 20.40 in Saturday's first round but the wind reading of three metres per second means it didn't count as an Olympic qualifying time.

He later clocked 20.78 in the final, which had another illegal wind reading of 2.8, and his chance of joining Hession in the 200m entry in London has now gone.

Colvert's personal best is an agonising .02secs outside the London standard.

Olympian Tori Pena won the pole vault with a 4.35m clearance where she finished ahead of Northern Ireland athletes Zoe Brown [3.95m] and Claire Wilkinson [3.55m].

On Saturday evening, Mark English clocked 1:46.20 for 800m in Madrid in his final outing before his challenge at this week's World Junior Championships in Barcelona while Brian Gregan ran 46.09 for 400m at the same meeting.