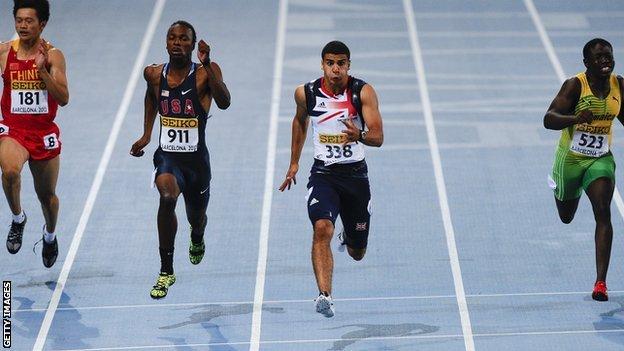 British sprinter Adam Gemili became the fastest British junior of all time as he won gold in the World Junior Championships 100m in 10.05 seconds.

Gemili was playing lower-league football on loan at Thurrock as recently as last November.

"Fantastic talent. I've seen a lot of young talent compete over a number of years promise so much and not be able to take it to the next level. What I've seen of Gemili over the last three months is exceptional, it was magical to see the intensity in his eyes. London is all about experience, he should just go and enjoy it but I do believe he will run sub-10 very soon. My advice would be don't rush him, don't bulk him either, the fact he's running 10.05 not at his full physical strength yet, clearly he's got amazing ability."

"I am speechless," Gemili said. "I was really nervous ahead of the final. I never thought that would happen. I have worked hard with my coach to get here."

Only Frenchman Christophe Lemaitre, who ran 10.04 in Rome in May, has run faster than Gemili among Europeans this year.

The 18-year-old shot to prominence when he ran 10.08 in May and finished second at the Olympics trials.

He beat the junior championship record of 10.09 set by Trinidadian Darrel Brown in 2002 and follows fellow Britons Christian Malcolm (1998), Mark Lewis-Francis (2000) and Harry Aikines-Aryeetey (2006), who all became junior world champion.

His time in Barcelona was 0.12secs quicker than American Aaron Ernest, who took silver in 10.17, with Jamaican Odean Skeen third in 10.28.

I think he's going to be one of the greatest sprinters of all time, watching that race."

"Maybe I can get some tips from him because of the great way he executed the race," said Gay, who will run at London 2012.

"He did a lot of things I'm working on which I don't know why it's so hard for me to get. He nailed it, man. And he has a lot more potential in the 200m.

Gemili added: "It's a massive stepping stone. Just making the final was an achievement but the fact I won is so amazing. It's going to help me a lot at the Olympics."

"Who knows?" he added. "All I know is that I feel good and I feel there is a lot more to come.

"I think it was very important to run that time. I ran quite quickly at the trials but not near the times I did in Regensburg [in Germany, in May, when he ran 10.11 and 10.08], so the fact that I've done it again somewhere else is great."

Gemili is the fastest Briton over 100m this year but only switched full-time to athletics from football in January.

He was a trainee at Premier League club Chelsea and moved to League Two Dagenham & Redbridge. He played 10 games at right-back on loan at Thurrock in the Isthmian Premier Division last season.

Britain's Sophie Papps finished sixth in 11.54 in the women's 100m final, with Anthonique Strachan of the Bahamas taking victory in 11.20.

Emelia Gorecka provided Britain's first medal of the championships on Tuesday with third place in the 3,000m, pushing the pace along herself and then holding on for bronze.