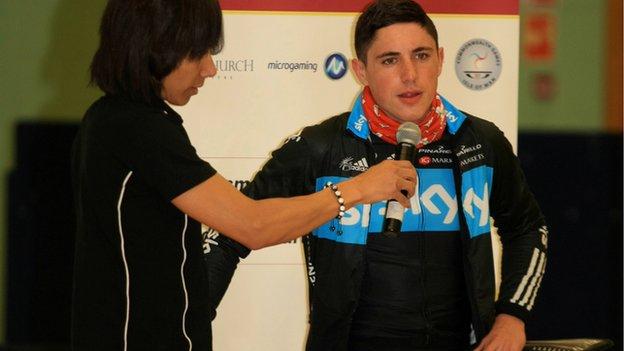 Leading Manx athletes have said a mentoring programme run by Dame Kelly Holmes will help inspire them to reach the Commonwealth Games in Glasgow.

Around 50 Manx athletes and 30 coaches attended the first session of her year-long programme.

Gymnast Tara Donnelly, 13, said: "The programme has inspired me and will definitely help me in the future."

Donnelly added: "The experience has been something I'll never forget. It has really helped me with my sport already".

Shooter, Lara Ward, 45, said: "The whole weekend was an inspiration and the fact every workshop was adapted to be as sport specific as possible was brilliant."

She said: "We have identified 55 talented sports people on the island between 13 and 55 from all sorts of sporting backgrounds and we're here to deliver workshops and teach people what it takes to be the best they can be in sport.

"I think what is crucial for the island is to develop an identity for high achieving and the Commonwealth Games in Glasgow in 2014 is a very important focus for the athletes."

President of the Isle of Man Commonwealth Games Association, Juliet Holt, said: "All the aspiring Glasgow 2014 athletes and coaches are looking forward to applying the knowledge they have gained to their training programmes."

The sports programme will incorporate practical workshops alongside coaching on nutrition, technique and psychology.