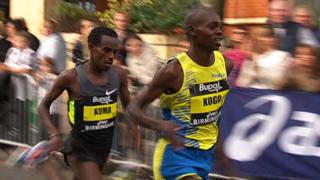 The 26-year-old held off Kuma's sprint challenge to win by two seconds, in one hour and 17 seconds - a course record.

Moreira broke away from the women's field with three miles to go to win by over two minutes in one hour 12 minutes and 49 seconds. Ethiopia's Berhane Adere came second ahead of Kenya's Irene Mogaka.

A runner is reported to have died during the 13.1 mile event that featured a record 18,000 competitors.