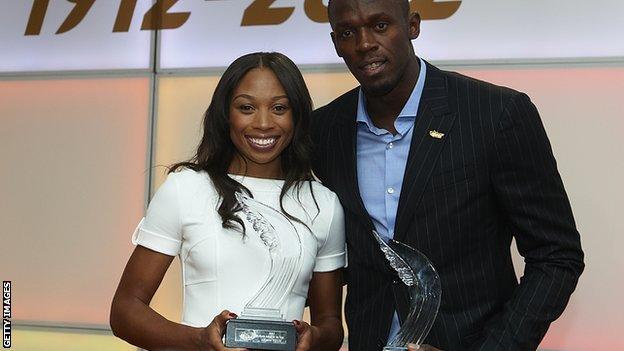 Olympic gold medallists Usain Bolt and Allyson Felix have won the male and female athlete of the year awards.

Both athletes were honoured by the International Association of Athletics Federation (IAAF) at a ceremony in Barcelona on Saturday.

Jamaican Bolt, who retained his 100m and 200m titles in London, is the first man to win the award four times.

Felix won three gold medals and claimed the award ahead of Britain's Jessica Ennis, who was on the shortlist.

American Felix finished first in the women's 200m and was also part of the winning 4x100m and 4x400m relay teams to become the first woman since 1988 to win three gold medals at a single Games.

The USA sprint quartet collected the female performance of the year title as they set a new world record in taking the gold medal, beating a time that had been set by an East German team in 1985.

Kenyan David Rudisha won male performance of the year for his winning run in the 800m in London, when he also set a world record.

Trinidad and Tobago's javelin gold medallist Keshorn Walcott and 100m sprinter Anthonique Strachan of Bahamas, who won gold at the 2012 World Junior Championship, were named as the rising stars of 2012.

Bolt, who also helped Jamaica to gold in the 4x100m relay, clinched the male athlete of the year award for the fourth time in five years after previous successes in 2008, 2009 and 2011.