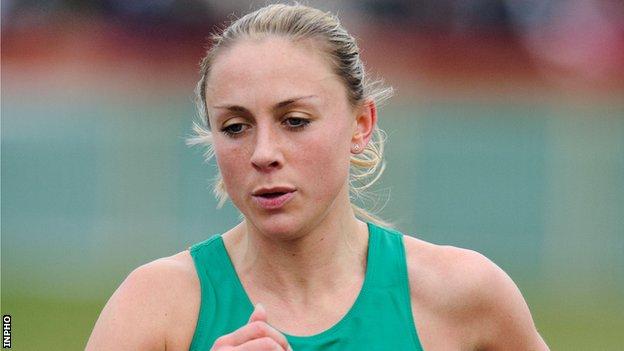 Kerry Harty was best Northern Ireland finisher in the senior races at the Irish Inter County Cross Country tests as she took fifth in the women's event.

Harty will now wait to see whether the run is good enough to secure her a place in the six-woman Irish team for next month's European Cross Country.

With Fionnuala Britton not running in Ratoath, Harty's place is not certain.

Paul Pollock was a disappointing 24th in the senior men's race with Joe McAlister best northerner in sixth.

Pollock had been fancied to run well in county Meath but the exertions of his impressive 2:16:30 marathon debut in Dublin over Halloween appeared to still be in his legs and he struggled amid the heavy going at the county Meath venue.

Letterkenny athlete Christopher Johnston won the Under-23 race held in conjunction with the senior men's event.

With Fionnuala Britton finishing third in a race in France on Sunday, London Olympics marathon competitor Ava Hutchinson clinched a four-second win in Ratoath over Cork athlete Lizzie Lee in the women's event with Sarah McCormack in third.

Fifth-placed Harty was 35 seconds behind Hutchinson while another Northern Ireland athlete Gladys Ganiel was seventh with Una Britton taking the Under-23 title.

Northern Ireland performance of the day was delivered by Armagh's Stephen Kerr who secured his place at next month's Europeans in Hungary by winning the junior men's title with Newcastle athlete Eoghan Totten also finishing an impressive third.