Jessica Ennis is capable of competing - and winning - at two more Olympic Games, according to her coach Toni Minichiello.

The 26-year-old backed up her unofficial status as the face of London 2012 when she won heptathlon gold on a memorable night for British athletics in August.

Ennis has been forced to juggle her time between photo-shoots, sponsors, wedding plans and an imminent house move, but Minichiello is keen to set new targets.

"We have both struggled a bit with the 'what next?' question, it's been hard," said Minichiello. "It's like we both climbed our Everests, and now we need to find a new challenge. 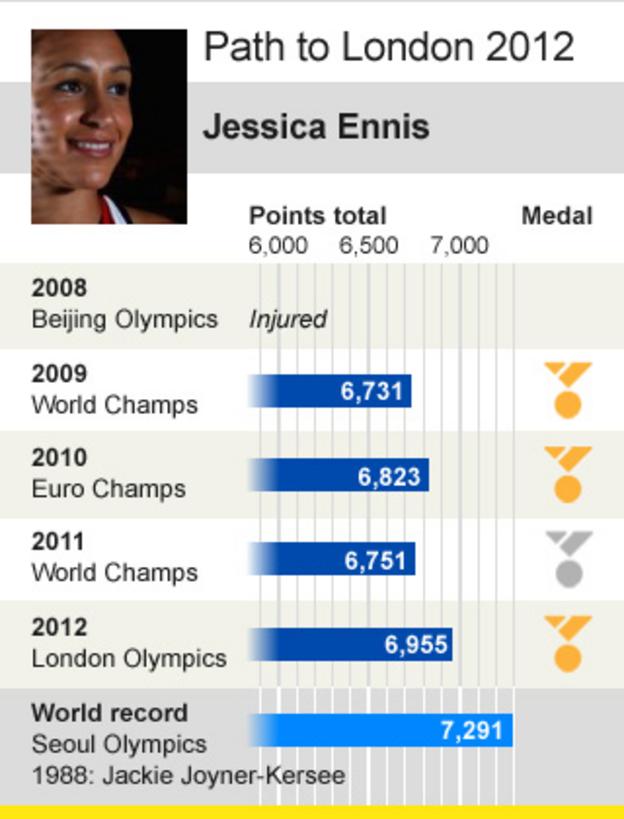 "Those decisions are much easier to make when you get back in to the routine of training. That's been a bit stilted recently, but we'll get there. I am convinced Jess has two more Olympic cycles in her: Rio in the heptathlon again, and then she could move to the hurdles."

Minichiello, who was last week named UK Coach of the Year, was speaking at UK Sport's annual World Class Performance Conference in Leeds.

In a session titled "Team Jennis to Jenesis", Minichiello and two members of the team behind the Sheffield-based star - psychologist Pete Lindsay and biomechanics expert Dr Paul Brice - explained not just how Ennis could maintain her current level of performance, but how she should improve.

Ennis set a new British and Commonwealth heptathlon record of 6,955 points on her way to winning gold at London 2012.

This total, the second best in Olympic history, was boosted by three personal bests in the seven events, including a stunning 12.54 seconds in the 100m hurdles, equalling the winning time in the individual race at the Beijing Olympics. It would also have been good enough for fourth in London.

But Minichiello and Brice told a room full of leading British coaches from other sports that it was "almost inevitable" Ennis would improve as her progress continues in events such as the javelin, long jump and shot put.

Brice said if Ennis was to put together a heptathlon of seven personal bests she would smash the 7,000-point barrier that only three women have gone beyond.

He also pointed out that even small improvements in certain disciplines - the high jump, for example - could result in huge points gains.

One discipline Minichiello is keen to concentrate on is the long jump. Stress fractures in her right foot caused Ennis to pull out of the Beijing Olympics and spend the next 12 months learning how to take off from her left foot.

Brice and Minichiello, however, are convinced Ennis is fast enough to jump 50cm further than her current personal best of 6.51m. This would bring another 65 points.

There is one potential obstacle to these plans for world domination, though, and that is the possibility that the Ennis-Minichiello partnership could be broken up because of a UK Athletics' plan to centralise their athletes and coaches in Loughborough.

The national governing body is also looking to reduce its full-time coaching staff from 14 to eight, with existing staff being asked to re-interview for their jobs.

Ennis has been a strictly "made in Sheffield" success story until now, and all indications suggest she is keen for it to remain that way, particularly as she presently has access to the city's outpost of the English Institute of Sport and the Don Valley Athletics Stadium.

Quite how this will work in future remains to be seen, with UKA's new performance director Neil Black and head coach Peter Eriksson believed to be keen on replicating the centralised coaching hub model that has worked so well for British cycling and rowing.

Minichiello's current deal with UKA expires on 31 December, after which date he could need to spend more time at Loughborough, or take on more athletes to supplement his reduced central contract.