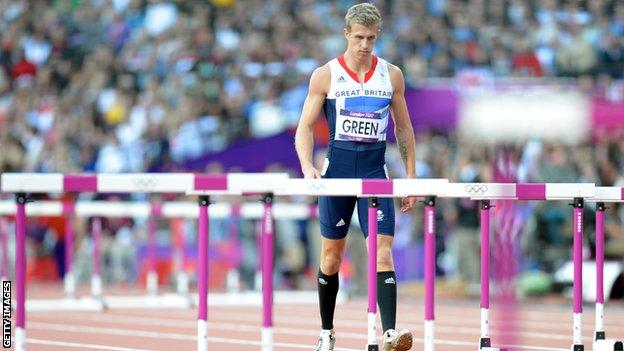 Kent athlete Jack Green has vowed not to repeat the errors of 2012.

The 21-year-old fell during his 400m hurdles semi-final at the London Olympics.

He told BBC Radio Kent: "I'm not going to let that happen again. You learn. I don't want to be in a sport where I don't believe I can be the best.

"As much as it's a good life, we train very hard. I wouldn't put myself through that if I thought I was going to be an extra."

He added: "I wouldn't waste my time doing it."

It still haunts me to this day. I feel I didn't even give myself the opportunity

The Hythe hurdler set a new personal best and British Under-23 record in the 400m hurdles in the last 12 months of 48.60 seconds.

He then ran a sub-45 second leg in the final of the 4x400m relay at London 2012, the quickest of all the hurdlers in the field.

However, he still regards his year as a disappointment.

"I had stride pattern issues all year," he said. "I didn't run as quickly as I should have.

"I wasn't as consistent as I should have been.

"I fell in the hurdles which sucked a lot. It still haunts me to this day.

"Had I finished and I hadn't run quick enough I could accept that. I feel I didn't even give myself the opportunity.

"The relay was the very promising thing. I've just got to sort the technical side.

Green will now turn his attention to a full winter schedule, culminating, he hopes, at the European Indoor Championships in Gothenburg in March.