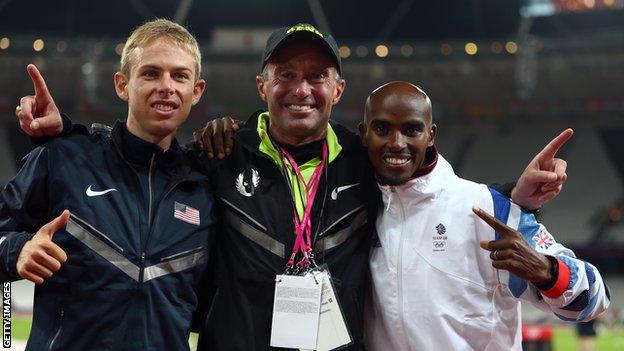 There was a distinct moment when Alberto Salazar knew Mo Farah was ready for his tilt at Olympic glory.

Coach and athlete were together at a high-altitude training camp organised by UK Athletics in Font Romeu in the Pyrenees. They had travelled from their base in Beaverton, Oregon, where the foundations for their part in "Super Saturday" had been laid.

Farah was rooming with his training partner, American Galen Rupp. It was time for their final workout before the 10,000m final in London but they had a more pressing issue on their minds, as Salazar recalls.

"Here they are, about to run their last major workout before the Olympic 10,000m final and they're more worried about a Fifa game. Each won one game that morning.

"And I thought, 'Wow, this is great. These guys are so loose they're not even worried about the workout. They know they're going to hit it.' And that's when I knew these guys are ready."

The athletes' confidence was part personality, part security in the knowledge that their preparations had been devised by one of the world's great coaches. It was a similar conviction that propelled Greg Rutherford on the long jump runway for one of the most memorable nights in British sporting history.

In a special programme for BBC Radio 5 live, built around interviews recorded at their training bases in the United States, Salazar and Dan Pfaff - Rutherford's coach - revealed what they believe to be the templates for success in track and field. They made the changes which can justifiably be regarded as the difference between gold and near-miss.

Salazar points to the blistering last-lap surges that have brought Farah three golds and a silver medal in the last four global championship finals over 5,000m and 10,000m.

"When Mo first came to the US, he was very weak muscularly, with a lot of muscle imbalances," says Salazar. "The improvement in that area is the number one reason for Mo's kick [at the end of his races].

A coach cannot take an average athlete and turn them into the best in the world. Michelangelo once said when he creates a sculpture, he frees the sculpture from the block of marble

"Now, instead of flailing with his arms and a lot of excessive bobbing movement with his head, losing upper body posture at the end of races, he's so much stronger that he's able to finish very strongly."

Pfaff is equally trenchant in his belief that attention to biomechanics underpins every success. "There are certain principles that if you violate, you're going to be less efficient and more open to injuries," he says. "To me, it's the foundation of coaching in any sport, and I coach in a lot of sports and consult all over the world."

Rutherford, according to Pfaff, has much in common with the Canadian Donovan Bailey, whom Pfaff coached to 100m glory at the 1996 Olympics in Atlanta. "They're both injury-prone and great risk takers, not afraid to gamble," Pfaff said.

Rutherford did just that in the build-up to London 2012, altering his technique on the runway to a model based on the successes of Carl Lewis, who won four Olympic gold medals in the long jump.

It was a move designed, in part, to reduce the number of injuries. "Sometimes, circumstances paint you into solutions and this is a case where it truly did," said Pfaff.

Whatever the biomechanics, injuries will happen and the type of treatment administered can transform an athlete's prospects. Pfaff fails to understand any reluctance to rely on science.

"There's this feeling out there that we don't want athletes dependent on medical care or therapy," he said. "Well, in Formula 1, they bring the car into the pits and check things over. I think these guys are Formula 1 cars and that's what you're going to have to do."

A coach in any sport is dependent on the talent, the raw material, crossing his path. As Salazar readily points out: "Nobody makes a great athlete. That great athlete was there; you get the athlete to bring it out of themselves.

"No matter how good a coach is, he or she cannot take an average athlete and turn them into one of the best in the world. Michelangelo once said that when he creates a sculpture, he just really frees the sculpture from the block of marble that's there.

"And as coaches, that's what we do too."