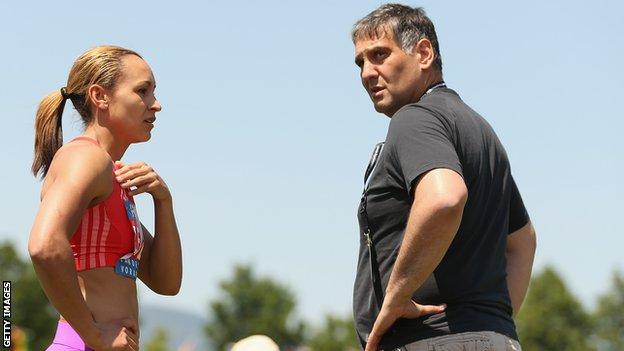 Toni Minichiello has said he will keep his role as Jess Ennis's coach despite losing his full-time job with UK Athletics.

Minichiello, who coached Ennis to Olympic gold in the heptathlon in the London Games, falls outside new criteria for funding.

He told BBC Radio Sheffield: "I was her coach when I was working in another job so there'll be no change there.

"Normally I'm at the track seven days a week, hopefully that won't change."

A field of one

Minichiello was the only Briton to coach a home star to an athletics gold in London.

Sheffield-based Minichiello, who was named coach of the year in November 2012, does not fit in with new mandates that require all coaches to be based in Loughborough unless they have more than one Olympic or World Championship medallist in their training group.

Ennis is keen to remain in South Yorkshire despite the fact that the Don Valley Stadium is facing potential closure.

UK Athletics have instead offered Minichiello a consultancy position instead that would require him to top up his income.

"It's a total change of career path for me because I have been used to being employed rather than self employed," he added.

"As a consultant I'll need to supplement my income and that means finding other things to do other than coaching.

"It is now about me getting my name out there and seeing if people want to work with me."