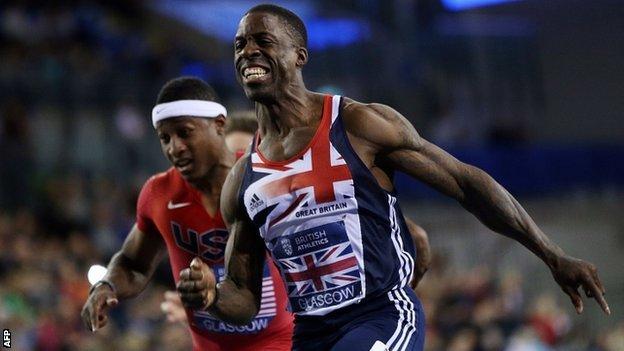 Britain's Dwain Chambers started his preparations for the European Indoor Championships with victory in the 60m at the Glasgow International.

The 34-year-old ran 6.58 seconds - the second-fastest time in the world this year - to beat Kim Collins of St Kitts & Nevis and American Mike Rodgers.

But the British pair finished behind American Duane Solomon.

Chambers, who won silver at the last European Indoors in Paris in 2011, having won gold two years earlier in Turin, will be hoping for a place on the GB team for this year's event, which takes place in Gothenberg from 1-3 March.

He got out of the blocks strongly at the Emirates Arena and went on to win easily with Collins and Rodgers both clocking 6.65.

"It's great to be here," Chambers told BBC Sport afterwards. "The response from the crowd was great and it's good to show the old boys are still holding on."

Greene went off quickly in the 600m event but he was always trailing Solomon. However, the Welshman dug deep over the final 200m to set a new British record of one minute, 16.22 seconds with Osagie clocking 1:16.45 for a new personal best.

Grabarz cleared 2.29m for a season's best but after Dmitrik made 2.31 the Briton was unable to respond.

"After London I went to Australia and I've come back refreshed and trained hard," he explained."This was a solid start for my first competition of the year."

Holly Bleasdale claimed victory in the pole vault while Perri Shakes-Drayton was an encouraging second in the 400m behind American Natasha Hastings.

The American made a sluggish start and it was Sailer who was the stronger and she powered away to a comfortable win and a new season's best of 7.16 seconds - the fastest time in the world this year.

"It feels good but I don't think I am better than her [Jeter]," Sailer told BBC Sport. "It was her first race and she is an Olympic medallist, but it feels good.

"Hopefully I can stay healthy until the European Indoors."