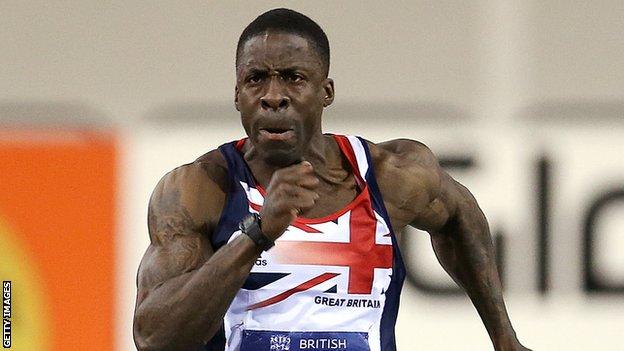 Great Britain sprinter Dwain Chambers has withdrawn from this weekend's European Indoor Trials in Sheffield with a back injury.

Chambers, 34, won silver at the 2011 European Indoor Championships and still hopes to be selected for the event in Gothenburg, Sweden between 1-3 March.

He ran 6.58 seconds to win the 60m at the Glasgow International recently.

Pole vaulter Holly Bleasdale will look to seal her place on the team with a third-straight victory at the trials.

The 21-year-old British record holder, who finished sixth at London 2012, is in an upbeat mood ahead of the European Championships.

"I'm pretty confident I can go there and win gold," said Bleasdale.

"I'm very positive. I've jumped against most of the girls who will be there. (Yelena) Isinbayeva is not doing it and neither is Silke (Spiegelburg).

North London-born Chambers ran for GB at the 2012 Olympics and is a former world indoor champion at 60m, winning the title in Doha in 2010.

But he will miss out on this weekend's trials which also double up as the UK Indoor Championships.

London 2012 400m silver medallist Christine Ohuruogu will also be in action in the 60m and 200m, while high jump bronze medallist Robbie Grabarz will be looking to build on a jump of 2.29m last month in Glasgow.