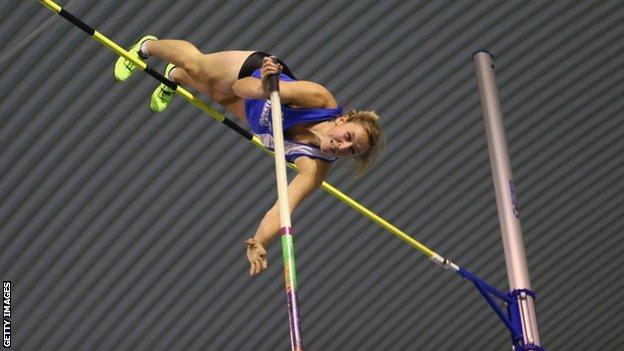 Holly Bleasdale leapt to the top of the world pole vault rankings on her way to the British Indoor title in Sheffield.

The 21-year-old went clear on her third attempt at 4.77m to book her place in the British squad for next month's European Indoor Championships.

"I'm pretty confident I can go there and win gold," said Olympian Bleasdale.

Chambers withdrew from the European Indoor Trials because of a back injury but still hopes to be selected for the championships in Gothenburg, Sweden between 1-3 March.

Dasaolu won in 6.58 seconds, while Philip's winning time of 7.15 secs puts her equal fifth in the world this year.

The 400m Olympic silver medallist Ohuruogu failed to reach the 60m final and will be hoping to do better over 200m on Sunday.

There was also disappointment for Andy Pozzi - whose Olympics was ruined by a hamstring injury - as he appeared to hurt his hamstring again during the 60m hurdles heats.

Gianni Frankis won the title in 7.73 secs but that mark was just outside the qualifying time for Gothenburg.

The 24-year-old still has time to achieve the qualifying standard before the team is named on 19 February.

There were no such problems for Bleasdale, who maintained her unbeaten start to the year to wrap up her third straight British Indoor crown.

Since finishing sixth at the London Olympics, Bleasdale now splits her time between Cardiff and Arizona after choosing to work with coaches Dan Pfaff and Scott Simpson.

"When I jumped 4.77m I knew there was a lot more even though I am still not quite clicking everything together like in training," said Bleasdale.

"Once I do that I will easily be clearing bars like that."