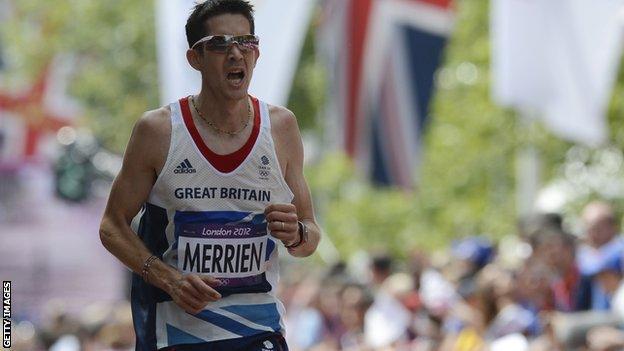 Marathon runner Lee Merrien has vowed to prolong his career in order to try and make the 2016 Olympics in Rio.

The 33-year-old from Guernsey, who finished 30th at the London Games, is currently recovering from a hip injury.

"I'm trying to get myself up to the fitness level to potentially be around for another three or four years at the top level.

Merrien, who was only selected for London after an appeal, was the highest placing British athlete in the men's race at the Games, finishing over five-and-a-half minutes ahead of teammate Scott Overall in two hours and 17 mins.

However, following the Olympics he suffered the injury that has interrupted his training schedule.

Merrien believes that missing this year's World Championships in Moscow may be a wise option because of the strain it would put on his body, but will be back for the 2014 Commonwealth Games in Glasgow.

"That [running in this year's World Championships] is probably unlikely this year as I'm targeting an autumn marathon to run a fast time," he said.

"The downside of being in the event that I'm in is you can't run a marathon every other weekend.

"It takes a lot of your body and the build-up to getting the most out of yourself is potentially a three-month process - and then you've got between four and eight weeks to get back up into hard training again.

"You need to respect your body to get the best out of yourself, and also make sure injuries are minimised."