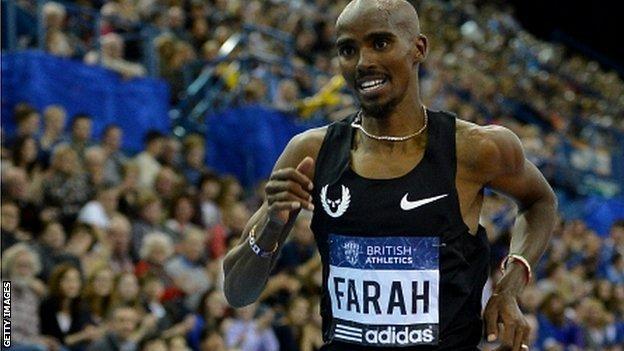 Britain's Mo Farah edged out Ethiopian Gebre Gebremariam in a dramatic finish to win the New Orleans half-marathon in a new national record.

The pair left the rest of the field trailing, but it was Farah who grabbed the glory as a sprint finish gave him victory in 61 minutes.

Road records have to be set on a course which is not "aided", which basically means that it should not be downhill or configured in such a way that the runners can be assisted by a prevailing wind. Farah's 60:23 in New York last year was set on such an aided course, as was Steve Jones's 60:59 in 1986. Paul Evans clocked 60:09 in 1995 in Marrakech, but the course measurement then was uncertain. All of which means that the official British record - as accepted by UK Athletics - had been 61:03 by Nick Rose in 1985 at Philadelphia. Now, Mo Farah's 61:00 can be accepted as the new record, providing all the other necessary conditions for records are met.

Farah actually ran faster in New York in 2011. However, that time of 60:23 was not officially ratified due to the gradient on the course.

The previous official record was 61:03 by Nick Rose at Philadelphia in 1985.

"It was definitely a fast course and had good guys pushing the pace," he said. "With about 200 metres left, I just kicked it in."

Farah before taking on the full distance in 2014.

"It's not going to be easy, I'm going to have to train for it," he added. "It is going to be a completely different ball game.

"Today does not necessarily mean that I am going to be amazing at it, I've got to go out there and do it. It is definitely going to be a longer race and going to be exciting. I am quite excited."

However, the major target for the Olympic 5,000m and 10,000m champion in 2013 is to repeat his London 2012 success at August's World Championships in Moscow.