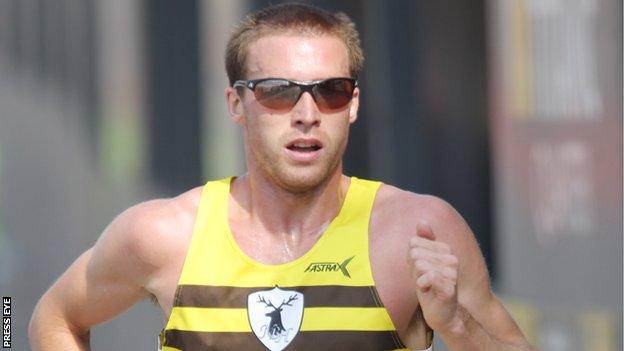 North Belfast athlete Stephen Scullion has been added to the Ireland squad for this weekend's European Indoor Championships in Gothenburg.

Scullion will compete in the 3,000m in Sweden alongside team-mates John Travers and Ciaran O'Lionaird.

City of Lisburn Amy Foster had already been selected for the women's 60 metres in Gothenburg.

Scullion achieved the European Indoor standard with a personal best run of 7:58.11 in Birmingham on 16 February.

Waterford man David McCarthy had also achieved the 3,000m standard with an impressive 7:51 clocking in Boston 10 days ago but he has been ruled out of the Championships by illness.

McCarthy's absence means an easier task for the selectors with countries only able to pick a maximum of three athletes for events.

Other late additions to the Ireland team are Claire Tarplee (1500m) and Rose Anne Galligan (800m).

Tarplee clocked a European Indoor 1500m qualifying time of 4:13.16 in Stockholm last week with Galligan booking her place in the 800m with a 2:03.39 clocking in Athlone on Saturday.

Sprinter Foster secured her place by running a personal best of 7.33 seconds for the 60m at last weekend's Irish Indoor Championships in Athlone.

Letterkenny athlete Mark English opted to decline the offer of a place in Gothenburg despite achieving the 800m qualifying standard in Athlone on Sunday.

English is focusing his attentions on preparing for the European Under-23 Outdoor Championships this season and also securing a place at the World Championships in Moscow.

Gregan, O'Rourke, O'Lionaird and Britton all look capable of challenging for medals in Sweden.