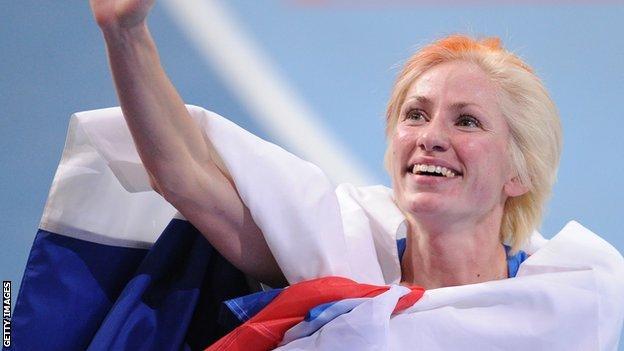 Great Britain head coach Peter Eriksson says there needs to be "greater investigation" into why so many Russian athletes are failing drugs tests.

There are 33 Russian athletes currently serving bans for doping offences.

"Any doping story is only as big as the athlete concerned - and that is why the Russia story is so compelling. Russia are a super power, their athletes win. They came second to the United States in the athletics table at the 2012 Olympics.

"There have been worrying things in the past. Before the Beijing Olympics, for example, the authorities caught seven athletes producing urine for drug samples that wasn't their own.

"The latest cluster of Russian athletes to be sanctioned has led to voices inside Russia saying they need to get together and do something, especially as Russia are staging the World Championships this summer.

"The dopers tend to be throwers or middle-distance runners and that is why the story is so pertinent to Great Britain as Lisa Dobriskey. the 2009 world silver 1500m medallist. Hannah England. who won world 1500m silver in 2011, and Jenny Meadows are middle-distance competitors.

"It's important for their medal chances that the authorities are catching these Russian dopers."

Eriksson said at the European Indoor Championships: "That's a bad number. They need to do work within the Russian system to find out what's going on."

But the Swede told BBC Radio 5 live that he believes the global anti-doping system was "starting to work".

He added: "You can only push Wada (the World Anti-Doping Agency) and all of the agencies who are dealing with doping to do more.

"Every time we find there's another cheater on the scene it's tragic for the sport but we have to look forward and do what we do.

"It's sad that it happened but it's good that it's come to light, so we can see that you can't cheat anymore, the system is actually working."

Russia has had 16 sportsmen and women banned for drug-related offences in 2013 - the same year it will host the World Athletics Championships in Moscow.

India has the highest number of athletes (52) on the International Association of Athletics Federations's banned list while Great Britain has four athletes serving bans.

"You see how tight the system is in many countries and how few there are that are getting caught in Europe and North America," said Eriksson, who was appointed head coach of UK Athletics in October.

"So I don't think it's damaging the sport now as much as it has done in the past, even though there are a few concentrated countries where they get caught."

British 800m runner Jenny Meadows has, however, said there are more nuanced after-effects of doping.

The Wigan athlete was beaten to the 800m title at the 2011 European Indoors in Paris, only to have her silver medal retrospectively upgraded to gold after Russian Yevgenia Zinurova was banned for doping.

"When I watched the event back I couldn't believe the Russian athlete caught me," Meadows recalled in an interview with BBC Radio 5 live.

"I had such a lead and now it's evident how she did it. I had family there and they had come to watch me - it would have been a life-changing moment, something that you wait for, to get on the podium and to hear your national anthem, I've never had that moment."

Meadows also revealed that losing that race to Zinurova had forced her to alter her training which she believes led to a season-ending Achilles injury.

"We literally did go back to the drawing board after that event and thought 'what am I missing?'," she said.

"During that winter we did up my mileage quite a lot which we felt led to my injury which kept me out of the 2012 season and a home Olympic Games.

"I do think [losing that race] was the catalyst for me to think I had to change something and that my training wasn't working - so it did have a big impact on my career."

Meadows aims to put any demons behind her when she returns to defend her 800m title at this weekend's European Indoor Championships in Gothenburg.