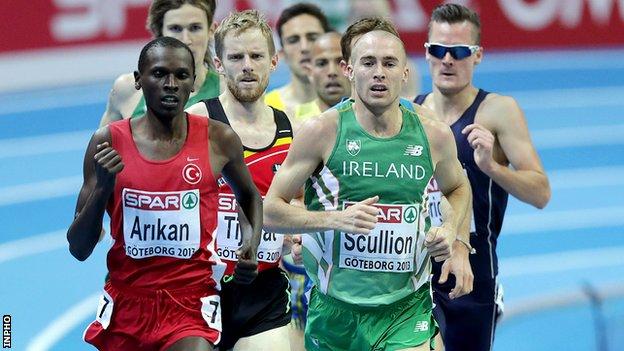 Stephen Scullion exited from the 3,000m at the European Indoor Championships after initial results had recorded him as qualifying for the final.

The North Belfast athlete's time of 8:00.78 left him eighth in a heat won impressively by his Ireland team-mate Ciaran O'Lionard in 7:55.12.

Derval O'Rourke missed a medal by an agonising .01secs as she was fourth in the women's 60m hurdles final.

The Turk, who won the 2010 European Outdoor title ahead of silver medallist O'Rourke, produced a national record and leading European time as she took gold in Gothenburg.

After getting a great start along with Yanit, O'Rourke looked set to hold on for a medal but she was passed by Belarus's Alina Talay and Italy's Veronica Borsi in the last stride with the silver and bronze winners both finishing .01 ahead of the Irish woman.

The Cork woman had clocked an initial season's best of 8.05 to finish second in her morning heat behind Yanit and then improved that to 8.00 as she finished fourth in the opening semi-final again won by the Turk.

In the men's 3,000m heats, the scoreboards in the arena initially suggested Scullion was one of the 12 qualifiers but they proved incorrect.

Scullion led the heat with four laps to go but fading over the closing stages. 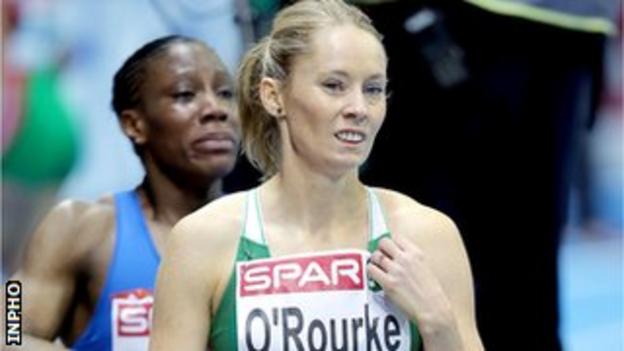 His time left him 14th overall with the last fastest loser's spot going to Russia's Andrey Safronov who clocked 7:59.17 to finish just ahead of Scullion in the opening heat.

As expected given his recent indoor form in the US, O'Lionaird had little difficulty as he won Scullion's heat and the Cork man will probably be disappointed if he doesn't finish on the podium in Saturday evening's final (18:20 GMT).

But while O'Lionaird impressed and Scullion performed creditably, their Irish team-mate John Travers had a chastening experience as he finished 11th and last in his heat in 8:23.83 - almost 25 seconds outside his personal best set at the Irish Championships two weeks ago.

City of Lisburn sprinter Amy Foster goes in the heats of the 60m on Saturday.

Brian Gregan, the fastest European this year, won his 400m heat on Friday morning in 46.97 after slowing down in the closing stages and almost allowing Ukraine's Vitaly Burtrym to catch him.

Burtrym was given the same time as the Irishman but Gregan's main rivals may be other heat winners Russia's Pavel Trenikhin (46.65) and the Czech Republic's Pavel Maslak (46.54) who were both considerably faster than the Irishman on Friday morning.

Britain's Nigel Levine clocked 46.68 to finish second in heat four behind Maslak and could also challenge for medals along with his team-mates Richard Strachan and Michael Bingham.

However, the immediate task for Gregan and the other hopefuls will be to come through Saturday evening's semi-finals which are likely to be competitive affairs in themselves.

Irish 800m runners Ciara Everard (2:04.33) and Rose-Anne Galligan (2:03.62) will also be involved in the semi-finals on Saturday after producing splendid performances to win their heats.

However, Irish pole vaulter Tori Pena had a disappointing exit in qualifying as she could only manage a height of 4.16m - 29 centimetres outside the national record which she equalled two weeks ago.